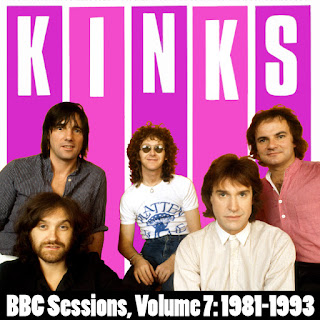 A year or two ago as I write this, I posted four albums of the Kinks performing for the BBC. Those albums went from the start of their career to 1978. I searched around and thought that was all there was, except for some 1993, the year of their last studio album "Phobia." However, since then, I've found enough material to make two more volumes in this series. Here's one of 'em.

Before I continue, I have to explain a bit about naming and numbering. When I posted those four previous BBC volumes, I called them "At the BBC," in line with the official Kinks BBC box set. But that's confusing, and I've tended to call my other BBC albums for other bands "BBC Sessions," so I've renamed everything in this series to that new name. Secondly, as I said, originally there were four albums chronologically before this one, but now there are six. That's because it occurred to me that two of the Kinks concerts I'd posted were performed for BBC radio, so those should be part of this series. Thus, I've renamed the 1974 Hippodrome concert and the 1977 Christmas concert. That makes this one Volume 7.

Oh, by the way, while I was doing all that renaming and renumbering, I decided to improve the cover art for each one too. Previously, all but the first one had black and white photos of the band. I decided I could do better, and I replaced all of them with color photos (including the first one, because I found a better photo). So you might want to check those out. The music in each album is the same, though I've updated the mp3 tags to reflect the new album titles, and adjust the volume balance between songs as well.

With that out of the way, let me finally get to the music here. In fact, the Kinks didn't perform for the BBC for all of the 1980s. But I was able to fill in that gap with some other TV or radio performances. For instance, they played on the US TV show "Saturday Night Live" in 1981 and again in 1984. Even so, the 1980s fly by fairly quickly with only seven songs here. The last five songs are from 1993, and mostly do come from BBC performances. There are lots more songs from the 1990s though, enough for me to justify another volume in this series after this one. I plan on posting that soon.

In terms of sound quality, all of the songs here are officially unreleased. But because they're from TV or radio shows, they generally sound very good, though some sound better than others.

I'm not sure what year the cover art photo was taken. But judging by the band members and their clothes and hair, I'm sure it's from the 1980s.