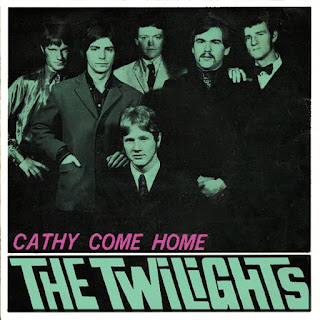 Yesterday, I promised to post more 1960s music from Australia, but I got a bit distracted. Here it is. Maybe you haven't heard of the Twilights. I hadn't until a couple of years ago (as I write this). But possibly my favorite musical style is classic rock from the late 1960s, the kind similar to what the Beatles were doing then. It turns out there's a lot of that done very well outside of the US and Britain; it just that you have to dig a little deeper to find it. The Twilights are a very good example.

Unfortunately, the Twilights didn't have a long career. They were only together from 1964 to 1968. But one of the singer songwriters, Glenn Shorrock, when on to greater fame and fortune with Axiom and then the Little River Band. Another songwriter, Terry Britten, went on to write many songs for others, including the hits "Devil Woman" for Cliff Richard and "We Don't Need Another Hero" for Tina Turner. You can read more about the band at their Wikipedia page entry:

They started out basically as an R&B band that mostly did covers, much like the Pretty Things, the Yardbirds, the early Rolling Stones, and many other British bands. But, like the best of those bands, they developed their own songwriting skills and transitioned around 1967 as psychedelic music briefly became the new trend. You can see the transition on this album.

I didn't include all the songs they did; I only included the ones I like. In particular, I skipped a lot of the covers they did early on, because many of those are songs that have been played to death by others, such as "You Really Got a Hold on Me" and "(I Can't Get No) Satisfaction." Instead, I concentrated on the songs they wrote, or songs especially written by others for them (such as "Long Life" written by Barry Gibb of the Bee Gees), plus some of the covers that they had hits with, like "Needle in a Haystack."

There are two songs at the end here that are technically by a band called "Pastoral Symphony." But no such band really existed. It was the Twilights collaborating with another Australian singer, Terry Walker, for one single. So I figured that was fit to be included.

The music here isn't all the band did. They released an acclaimed album in 1968, "Once Upon a Twilight," and a few singles after that. That'll come next.

The Twilights were so influenced by the Beatles that they got a copy of "Sgt. Pepper's Lonely Hearts Club Band" a few weeks early, and proceeded to play every single song on it, in order, in their concerts. I wish a recording of that existed. So if you're into that kind of music, like I am, you should enjoy this. The song "Cathy Come Home" in particular was a big hit and should be considered a classic.

For the album cover, I used the cover of the "Cathy Come Home" with a few minor changes. I removed the record company logo, since they didn't put that on their other albums. I removed the name of the B-Side, and doubled to name of the A-Side, "Cathy Came Home," to cover up for that.