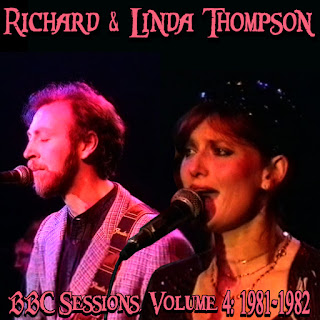 Here's the fourth and final album in my album series of Richard and Linda Thompson performing for the BBC. If you liked any of the first three, this is more of the same good stuff.

The only album this duo released in 1981 or 1982 is the great album "Shoot Out the Lights" in 1982. So you might expect to see a lot of songs from that. In fact, only three songs come from it ("Just the Motion," "Shoot Out the Lights," and "A Man in Need"). Instead, the songs are from all points in their musical careers, even including a song from when Richard Thompson was in Fairport Convention ("Sloth").

Technically, only one of the songs is officially unreleased, but that depends on what you think of a DVD release. Eight of the 12 songs come from an officially released DVD, but I had to convert them to mp3 format. The vast majority of the songs were broadcast on the BBC, though the last one was broadcast on a US radio station. All of the songs have excellent sound. As with the rest of this series, I stripped the audience applause at the end. And, like the rest of the series, I doubt you'd even notice these came from a concert with an audience if I didn't mention it, because the audience stayed so quiet during the songs and the sound is so good.

For the album cover, I took a couple of screenshots from the DVD mentioned above. One was of Richard and the other was of Linda. In Photoshop, I adjusted things so they would be close to each other (instead of widely separated on stage as they actually were).  The odd coloring is due to colored stage lights.