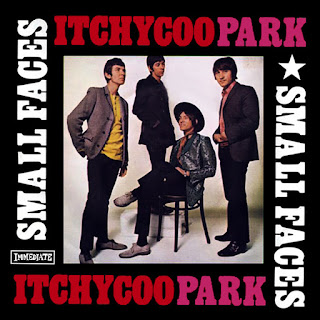 Here's the next stray tracks album for the Small Faces. I think this one is particularly excellent, mainly due to the inclusion of four of their best hit singles.

In Britain around this time, it was the usual custom to not put out the same songs on singles and albums, though there were some exceptions. This is because Britain was still recovering economically from World War II, and it was considered unfair to have someone pay for the same song twice. So the studio album the Small Faces put out in 1967 (called "Small Faces," the second album they put out with that name) didn't have any hit singles on it. Thus all those hits are here. (However, one of the B-Sides, "Talk to You," was included on the album, so I didn't put it here too.)

And what hits they are! "I Can't Make It," "Here Come the Nice," "Itchycoo Park," and "Tin Soldier" are all great songs. But I especially love "Itchcoo Park." If I had to make an album of my favorite songs on all time, I think that would be on it.

The rest of the album is made up of B-sides and rarities. Note that "Call It Something Nice" is often considered a later song, due to it being included on the 1969 album "The Autumn Stone," but it actually was recorded in 1967. Note that I used versions from the box set "Here Come the Nice" whenever I could, since they have superior sound. But in some cases they also have slightly different mixes than the originals.

I end this album with three songs that technically aren't by the Small Faces. P. P. Arnold was an American female soul singer who wound up in Britain in the late 1960s and got closely tied to the Small Faces, in part due to the fact that they were both on the same record label. She sang backing vocals on a lot of their songs, including "Itchycoo Park" and "Tin Soldier." I've included "(If You Think You're) Groovy" here because it was written by the main Small Faces songwriting team of Steve Marriott and Ronnie Lane, and it's performed by her and the Small Faces.

The last couple of songs are a less obvious inclusion. Jimmy Winston was a member of the Small Faces for most of 1965. He left and/or quit the band for various reasons, including the fact that he switched to an acting career. But he did release a couple of singles before leaving his music career behind. I've included a 1966 single on the last stray tracks album, and I'm including his 1967 single here. In both cases, I'm including them because I consider the A- and B-Sides very good songs, and also because they're very much in the Small Faces style. Jimmy Winston even made the same transition to a more psychedelic sound at the same time the band did.