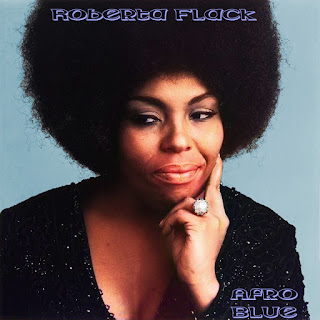 In mid-2020, a deluxe edition of Roberta Flack's album "First Take" was released. This was very special as far as deluxe editions go, because it contained a second disc of what was essentially an entirely unreleased album. In fact, there's so much music on it (an hour and 16 minutes) that it could be a double album. "First Take," her debut album, was recorded in early 1969 and released by the end of that year. All but the first songs here was recorded in 1968. So one might think of this as her true debut album.

Flack started out playing small clubs for several years before getting a record contract. Most of the songs here were recorded in three days, and came easily since they consisted the songs of her well honed stage act. The vast majority of the songs are covers. However, "Groove Me" is not the hit by King Floyd, which wouldn't come out until 1970. It's a Flack original.

The first song is a bit different. "All the Way" is a live recording done in 1969. But it wasn't released until decades later on a Les McCann archival album called "Les Is More." This was included on the "First Take" deluxe edition. (Another song on that, "Trade Winds," has been put on the stray tracks album "Freedom Song" instead.)

By the way, as generous as the bonus tracks on the deluxe edition are, there are many more songs recorded at that session. Other songs include: "On a Clear Day," "A Change Is Gonna Come," "Lovin' You," "Love for Sale," "With These Hands," "A House Is Not a Home," "Just a False Start," "Elusive Butterfly," "First of All," and "This House," plus early versions of the songs from "First Take." Let's hope those get released someday too.

If you like Flack's first few albums before she went fully into a slick, mainstream direction, you're sure to like this.

I couldn't find any photos of Flack from 1968, which isn't surprising since she was largely unknown back then. The one I used is from a series of promo photos that came out when her debut album was released in late 1969. It was a black and white photo, but I colorized it.