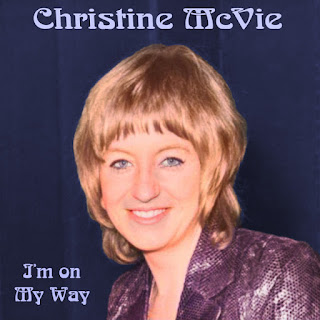 I previously posted the album, "Christine Perfect," a 1970 solo album by future Fleetwood Mac star Christine McVie back when she was a blues singer and keyboardist known by her maiden name, the same as that album title. When I posted that album, I mixed the best songs from it with some other songs she did prior to joining Fleetwood Mac in 1971. But I kept finding more worthy songs, until I decided to split her pre-Fleetwood Mac recordings into two albums.

I still have the "Christine Perfect" album, which can be found here:

But I moved some songs from that to here, so I can have all of her early songs where she sings lead vocals in one place.

Christine McVie (I'm going to call her that, for consistency's sake) became a talented piano player at a young age, and had a natural talent for singing the blues. She started singing as a guest vocalist in clubs for blues bands. So when some musicians she knew started a new blues band called Chicken Shack in 1967, she joined them as a keyboardist and backing vocalist. But her skills were greater than that. From the very beginning, she wrote some songs and occasionally sang lead. In fact, the band's very first single, "It's Okay with Me Baby" was written by her and sung by her.

She stayed with Chicken Shack for two albums. But the band was dominated by Stan Webb's guitar playing and singing. She only had two lead vocal turns on their first album, and four on their second. Then, the band released a single of the Etta James classic "I'd Rather Go Blind," with McVie on lead vocals. It was a big hit in Britain. At that point, it became clear that she had too much talent to stay second fiddle in Chicken Shack, so she left the band and started a solo career.

I've gathered all the Chicken Shack songs where she sings lead and included them here. The songs were billed just to "Chicken Shack" but I've credited them to "Christine McVie & Chicken Shack" just for clarity.

At the end are four songs she did as a solo artist that aren't songs on her 1970 solo album "Christine Perfect." One is an outtake and the last three were played for the BBC.

I've called this album "I'm on My Way," even though that's a song on that solo album that isn't included here. I chose that title because that was the original planned title for her solo album. On top of that, it's a very fitting title for the start of one's career, because these early songs very much did send her on her way to musical success.

Also, while I was putting this together, I realized that I'd misplaced three songs she did for the BBC by a year. So I swapped some songs between the Fleetwood Mac albums "BBC Sessions, Volume 5" and "BBC Sessions, Volume 7." I made other changes to those two albums too. So if you're into this kind of music and you've downloaded those already, I recommend you get the latest versions instead.

I tried but failed to find any good color photos of Christine McVie from 1968 or 1969. Instead, I found a black and white one of her holding an award for the Melody Maker female singer of the year award in 1969. Then I colorized it.