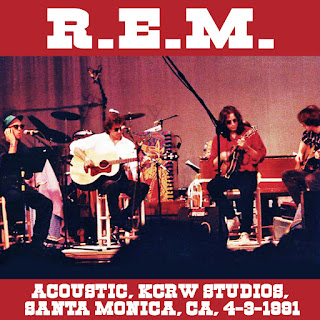 In early 1991, "R.E.M." released the album "Out of Time." It was a huge hit, reaching number one in both the US and Britain, and eventually selling around 20 million copies worldwide. Rather than go on a traditional tour though, the band only about 20 promotional performances, with some of them just playing a song or two. Most of these were acoustic in nature, though with light drumming. This culminated in a concert for MTV Unplugged. That was eventually released as half of the official live album "Unplugged: The Complete 1991 and 2001 Sessions." Furthermore, the 25th anniversary deluxe edition of "Out of Time" contains a concert at the Mountain Stage in West Virginia that's very similar to the Unplugged one.

I explain all that to give context to what this is. This is another acoustic concert from that short promotional tour. As such, the set list is similar to both the Unplugged and Mountain Stage ones, but there are differences. One key difference is that both of those shows were in front of audiences. This was done in a radio station studio, and if anyone was there, they didn't clap. So the sound is a little cleaner. Even though this is a bootleg, the sound is excellent, just as good as either of those two officially released shows.

One fun aspect of this show is that the band was clearly having fun winging their way through some odd songs. Several of these are just short snippets of covers, such as "Tusk," "Jackson," and "Radio Ethiopia," because they tried doing those and realized they couldn't get far. They do some other covers more successfully with "Love Is All Around" and "Spooky."

One bummer though is that there is no banter between songs at all. In fact, the ends of the songs are usually cut off a couple of seconds early. I did a little editing to fade the songs out in a way so the abrupt endings aren't so noticeable. But note that it's not a big problem, since it's literally just a matter or a second or two in most cases. Still, if anyone has a more complete version with the banter between songs, please let me know so I can post that here.

R.E.M. did a similar show for "2 Meter Sessie" in the Netherlands. I found three songs on that that they didn't play at the main KCRW show here, so I've added them as quasi-bonus tracks at the end. The sound quality is equally good on that.

To summarize, if you have the "Unplugged" album, this isn't that different. But still, it's a fun listen, and it's cleaner without the audience clapping. The KCRW portion is 43 minutes long. If you add in the extra songs, the album is 56 minutes long.

The cover art photo comes from the Mountain Stage concert that I mentioned above.