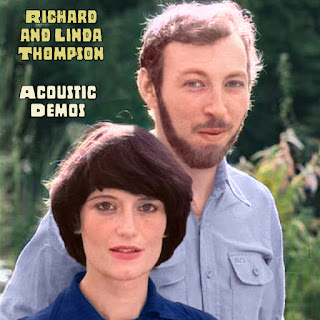 I spent the past few days updating my Richard and Linda Thompson music collection, after processing the new material on the recently released "Hard Luck Stories" box set. I want to post the new albums I've made from that over the next few days, while while I did is still fresh in my mind.

This is exactly what it says in the title, a collection of acoustic demos. Note that it does NOT contain all of the available acoustic demos. In a few cases, there are demos of songs that don't exist in any other version. I've put all those in the relevant stray track albums. This contains just the demos of songs available elsewhere. Most of them are of songs from studio albums, I believe "Sometimes It Happens" is the only exception. Also, "When Will I Be Loved" is a demo of a cover song by the Bunch, a short-lived group with Richard and Linda Thompson in it. This version is a duet between Linda and famous folk singer Sandy Denny, who also was part of the Bunch.

I must admit I sneaked in a couple of songs here that aren't actually demos. That's because they sound exactly like them, and I didn't have a better place to put them. Two are live acoustic performances with the audience applause edited out, and the other is considered an "alternate version." I didn't include any full band versions, but "Traces of My Love" does have some light drumming on it.

This album is one hour long.

Damn, there are so few good photos I can find of Richard and Linda together. This one is from October 1978. It was in black and white, but I colorized it.