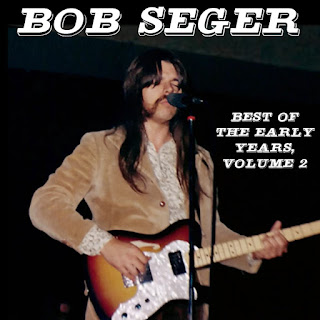 A couple of days ago, I posted the Volume 1 to this. My explanation from that remains the same here. Bob Seger wasn't well known outside of his home town of Detroit until he hit it big around 1975. Later, after he became a rock superstar, he decided he didn't like his early albums and let all of them from 1973 and earlier go out of print. Amazingly, they're still out of print and not well known decades later. So this compiles the second half of what I consider the best songs from his out of print era.

All of the songs come from three albums, except for "Lookin' Back," which was an A-side in 1971. The three albums are: "Brand New Morning" in 1971, "Smokin' OPs" in 1972, and "Back in '72" in 1973. "Brand New Morning" is a solo acoustic album (though against Seger's wishes, as the record company released his demos without his permission), "Smokin' OPs" is a covers album, and "Back in '72" is a more typical rocking album mostly made of originals.

The songs "If I Were a Carpenter," "Love the One You're With" and "I've Been Working" are covers; the rest are originals. A live version of the last song, "Turn the Page," would become a rock classic when it was released on the album "Live Bullet" in 1976. But this is the original studio version.

By the way, for the time period of album and the previous Best Of, Seger's backing back went under different name, such as Bob Seger and the Last Heard, the Bob Seger System, and Bob Seger and the Borneo Band. His more famous Bob Seger and the Silver Bullet Band wouldn't be formed until 1974. For simplicity's sake, I just label everything as "Bob Seger."

The cover art photo was taken at a concert in Lakeview High School in St. Clair Shores, Michigan, some point in 1973.