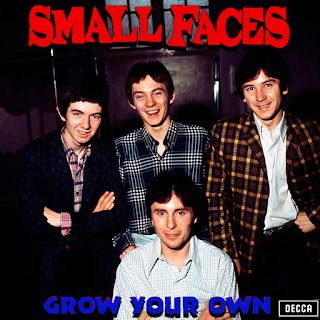 There are lots of great musical artists I haven't begun to address on this blog. Here's one I'm just starting to deal with: the Small Faces. I think they're still underrated. That's especially true in the US, because they only had one hit there, "Itchycoo Park." (Allmusic.com has called them "the best British band never to make it big in America.") But if you like soulful rock, similar to the Yardbirds, the mid-1960s Rolling Stones, and the mid-1960s Who, you really should check them out.

However, you probably don't want to start with this album. This is more for the serious fans, as it contains deep cuts and no hits. If you're not that familiar with the band, I suggest you start with the next couple of their albums I'll be posting, Then, if you like them, work your way back to this one.

The Small Faces got started in 1965. I see the band mainly as a union of two great talents: the singer-songwriter Steve Marriott, and the singer-songwriter Ronnie Lane. They formed a songwriting team and wrote many hits and other fine songs together. They didn't do much musically before forming the Small Faces together, but they did have some. In fact, the first seven songs here are all from either Marriott or Lane in the year prior to that formation. They're very rare, and I suspect even most die-hard Small Faces fans haven't heard them. But if you're such a fan, I'm pretty sure you'll like them because they're very much in the spirit of the band. The only snag is that, on a couple of the songs, Marriott hadn't fully developed his distinctive voice.

These pre-Small Faces come from obscure sources, and I couldn't find much information on them. I don't know which ones are originals and which are covers, though "You Really Got Me" obviously is a cover of the Kinks hit. I'm pretty sure the two Lane songs, "Don't Talk to Me of Love," and "That's What I Want," are originals. You can read the interesting story behind these unreleased songs here:

According to that, Lane's band at the time, the Moments, essentially was an early version of the Small Faces, containing Marriott and all the future members of that band except for one.

Note that I also end this album with a couple of songs by a band other than the Small Faces. That's because the leader of that band, Jimmy Winston, was a member of the Small Faces for much of 1965. He left the band due to personality conflicts, possibly involving the manager. He sings lead on two of the Small Faces tracks here, "Jump Back" and "Baby Don't You Do It." He only released a couple of singles before getting into acting instead. But I like them, which is why I'm including them. Plus, they have that same Small Faces sound.

The actual Small Faces songs here are fairly obscure. There's only one A-side, "I've Got Mine," but that was a failed single. Two others are B-sides, and the remaining three only came out on archival releases many years later. A lot of them are covers, including a cover of the big Del Shannon hit "Runaway." (Apparently, the only reason the band did that song was at the insistence of their manager, because he sang the intro part.)

So, like I said, these are mostly deep cuts for the more dedicated Small Faces fan. Stayed tuned for the next album in this series, where the band really hit their stride.

On a final note, I made "Before You Accuse Me" a bonus song only because the sound quality is just okay and the performance of that blues standard is also just okay. There are a couple more songs from the Lane recording mentioned above that I didn't include at all, not even as bonus tracks, due to various issues, such as the song cutting off early. You're not missing much.

Before You Accuse Me (Ronnie Lane & the Outcasts)

I made the album cover using a 1965 promo photo. I added in the logo of their British record company at the time, because it was on the cover of their debut 1966 album, "Small Faces."