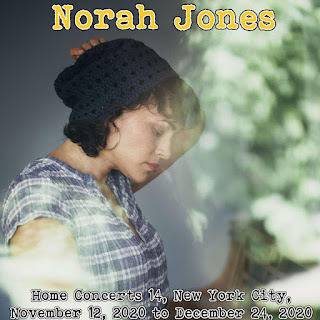 I'm happy to be presenting the next in my long series of Norah Jones home concert albums. But there's bad news in that this might be the last one. The number of songs she did in her home concerts slowed down in November and December 2020, ending with a Christmas song the day before Christmas. When she posted that, she said she would be back with more in 2021, but it's mid-February 2021 as I write this, and she hasn't done any of her usual weekly home concert shows.

By now, if you've listened to some of the albums in this series, you should know the drill. She plays all the songs alone on either piano or guitar. Everything is officially unreleased, but the sound quality is pretty good. Most of the songs were done by her in different formats before, but there are four here that seem to be new: "What a Difference a Day Makes," I'll Fly Away," "Blue Christmas," and "Have Yourself a Merry Little Christmas." During this time period, she did repeat some songs she played in previous home concerts, but I didn't include any of those duplicates.

I've added in two songs she did at a Tom Petty tribute concert in October 2020 as bonus tracks. They sound just as good as the others, but they're only bonus tracks because A) they weren't done as part of her home concert series and B) I've posted them on a different album already.

This album is 42 minutes long, not including the bonus tracks.

Re: the album cover art, I got tired of using screenshots from her home concerts, since those look very similar to each other. Instead, I searched Norah Jones's Instagram, and found this artistic photo looking at her at the piano through a window. It dates from September 2020.