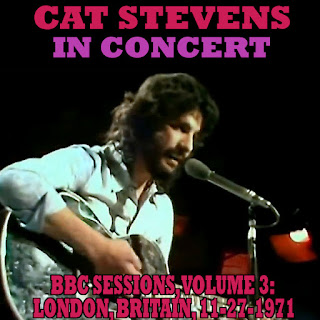 In a recent blog post, I said I've been digging deep into BBC material and I plan on posting a lot of that soon. Some musical acts have official BBC collections that are well done and complete, but others are flawed and/or incomplete, and a surprising number still don't have such an official collection at all. I think that's a really big share for music from the 1960s and early 1970s because there wasn't a lot of music being saved back then aside from the released albums and singles. Yet BBC recordings generally have excellent sound quality, and often contain unique songs that otherwise would have been lost forever.

Here's something that isn't revelatory in terms of unique material, but is a lovely album to have just the same if you're a Cat Stevens fan. In fact, in terms of live music from his early 1970s time, I'd say this is the best of the best due to the sheer sound quality. It's also fairly long compared to other live recordings from that time, and has lots of entertaining banter between songs. It's also acoustic, which makes it somewhat different than his semi-acoustic records of that time.

There's not much else to say. The recording is so well done that I didn't have to make any changes. It's 54 minutes long.

UPDATE: On February 14, 2022, I made a minor update. I didn't add or remove any songs. However, since I have two BBC albums that chronologically come before this one, I added "Volume 3" to the title and the cover art.

For the album cover, I took a screenshot from the BBC video. The text at the top is also exactly from the video. I added the text at the bottom in the same style.