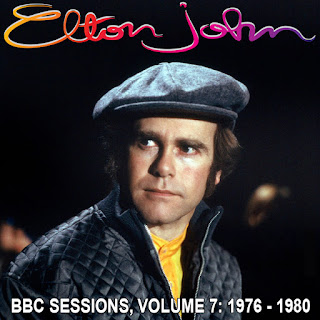 I really thought I was done with this series of albums in which Elton John performs for the BBC. I think he did a lot of great music in the early and mid 1970s, but the late 1970s were a career low for him, thanks to the popularity of disco at the time and drug problems and other personal problems he was having.

But then I stumbled across a great solo version of "Island Girl" done for the BBC while looking for some other BBC stuff by another artist. I figured that was a full band song, and I had no idea he did a stripped down version with just his voice and piano back in the 1970s. That made me think that perhaps I'd been hasty in writing off his late 1970s public performances. Perhaps he did other songs in a solo acoustic piano format instead of slathering them with disco beats and other bad 1970s production.

It turns out I found a bunch of stuff like that. In fact, I found so much that I broke off a few songs from Volume 4 in this series (it had been overly long) and added them here. Then I filled the rest with a bunch of performances for the BBC and other TV and radio shows, all of them done in the same solo acoustic format that is drastically different from his studio albums of that era. I'd overlooked or written off some of these songs, but these versions made me consider them in a whole new light.

Note that the song "Bennie and the Jets" appears here twice. Normally I'm against such duplicates, but it's okay here because the first version is with a full band while the second version is a solo piano one. Also, a different version of "I Think I'm Going to Kill Myself" appeared on Volume 4.

This album is 53 minutes long. I'll probably stop here with the BBC series, unless more interesting TV and radio performances from the 1980s, especially solo acoustic performances, drop into my lap.

Note again that Volume 4 in this series has been changed, since the first four songs here used to be on that one. So you might want to get the updated version of that one, to avoid duplication. And what had previously been Volume 7 (the 1976 BBC concert in Edinburgh) has been renamed Volume 8 to keep things in chronological order.

The cover art photo comes from a 1979 concert, but I don't know any other details about it.