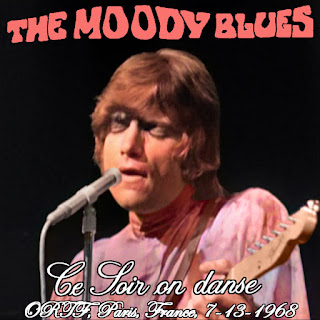 As I mentioned in a recent blog post, I'm working on posting some more Moody Blues music. As part of putting that together, I came across a very interesting concert recording from them that I never knew existed. It's got great sound quality and comes from a time when there are very few live recordings, even as bootlegs. So here you go.

You might say this is officially released, but just barely. In 2018, a super deluxe edition of the band's 1968 album "In Search of the Lost Chord" was released. As part of that, it contained two DVDs. One of them had the video footage of this concert. I've converted it to mp3 files. I don't believe this was available anywhere as music files until now.

This is a very interesting concert, because it combines the music of the first and second versions of the band. Basically, from 1964 to 1966, the Moody Blues were one of many R&B based British bands, best known for their hit "Go Now." At the start of 1967, they lost two band members and gained two others, including Justin Hayward, who would be the main singer and songwriter. The band was practically reborn into a different style of lush and somewhat poppy prog rock.

At the time of this concert, the band had released their 1967 album "Days of Future Passed," but they hadn't released any music in 1968 yet. This concert took place in France, and that's important. They were much more popular as a R&B act in France than anywhere else, thanks to their 1966 single "Bye Bye Bird," a cover of a song by blues legend Sonny Boy Williamson, which hit number one in France but stiffed everywhere else. Thus, they played "Bye Bye Bird" and other songs in that R&B style, even though they no longer had their lead singer (Denny Laine) from their R&B era. This was probably the very last gasp of the band with even one foot in that earlier mode.

I broke the video up into the songs listed below. The sound quality is excellent, because the concert was recorded for a French TV show. There are no talking tracks between songs, because the band members hardly said a single word, other than the occasional "thank you." I'm guessing maybe they worried the French audience wouldn't understand them.

If you look at the song list, you might notice they played "Nights in White Satin" twice. Normally I hate to have the same song twice on an album, but since that's what they did, I'm leaving in both versions. Of course it makes sense that they particularly wanted to promote that classic song. Also, note that the band didn't exactly play "God Save the Queen" (which by the way has the same melody as "My Country 'Tis of Thee"). That song is listed because there was about a minute of drumming as the next song started, and somehow the melody to that song can be clearly heard. So it's more like a snippet of that song briefly and accidentally happened.

I've added two extra songs at the end as quasi-bonus tracks. These two come from a different appearance on the same French TV station a few months later. Both of those songs are from their next album "In Search of the Lost Chord" because it finally got released in the meanwhile. There's no applause after those songs because there was no studio audience, apparently.

Oh, by the way, the song "Beautiful Dream" is a song by band member John Lodge that has never been officially released in any form except on the DVD mentioned above.

The main concert is 46 minutes long, but this album is 53 minutes long if you count the two extra songs as well.

I have to admit I kind of got lazy with the album cover art. I wanted to use an image from the exact concert in question, which is possible since one can watch it on DVD. But the show was only recorded in black and white, and I hate black and white album covers, so I decided to take a screenshot and colorize it. I took a screenshot of just Justin Hayward instead of the whole band because the band was playing in a crowded room with people on all sides, and colorizing all the band members and lots of the audience on top of that would have been too much trouble for me. I chose a rare angle where there was nothing but darkness behind him, again 'cos it was the easiest way to go.

I took the band name font and style from that same DVD. I also took the cursive title of the TV show from the DVD too. Note the lack of a capital "D" in "danse" is exactly how it appeared on screen, so that isn't my fault. I added in the line of text below the TV show name in the same font.