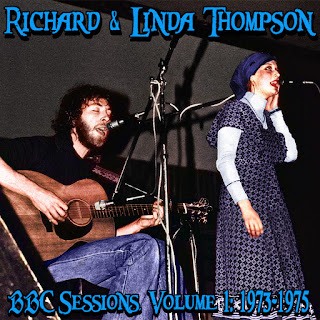 I've been posting a bunch of Richard and Linda Thompson albums. Here's the start of a four album series, featuring the duo performing for the BBC.

In 2011, a Richard Thompson album named "Live at the BBC" was released. It's made up of three discs, and the first one contained all Richard and Linda Thompson performances. So one might think that's all there is. But it turns out this was just the tip of the iceberg. In late 2020, a box set of the duo called "Hard Luck Stories" was released. It contained many more BBC performances. However, in a surprise twist, most of them are not labeled as such. It turns out nearly all of the live material on that box set come from concerts or sessions recorded for and played on the BBC.

For this series, I've gathered up all that material, and added some more. But there are a couple of exceptions. For one, if there's a rare song where the only good version is from a BBC performance, I've put that on one of the stray tracks albums I've made, and I don't want to repeat that exact performance in this series. And two, I've tried not to repeat the same song twice in the series. Luckily, there are very few instances of such duplicates.

Mostly, I had a problem with the song "A Heart Needs a Home." I bent a little bit and have included a version of that on this album and another one on the next one in the series. This one is fully acoustic while the next one has a light band backing. But I balked at including a third version (from the "Watching the Dark" box set) that's from the same year, since it's not much different from either of the versions I did include.

Everything on this volume has been officially released, so it all sounds great. The last four songs come from a concert in front of an audience. As I often do, I edited out the audience applause so these songs will fit in with the rest. I could do that because the recording of those is good enough to sound like a studio performance.

This album is 46 minutes long. The other albums in this series have comparable lengths.


I've complained about this before, and I'm likely to complain again: it's really hard to find good color photos of Richard and Linda Thompson! I've used up pretty much all the good ones I could find, at least for this time period, so I've had to colorize this one. It comes from a concert at the Imperial College in London in March 1973.