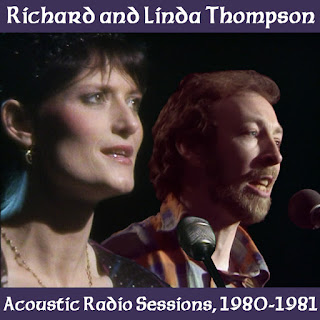 Some years ago, someone named "propylaen" posted a Richard and Linda Thompson bootleg called "The Complete Radio Sessions, 1980-1981." It's a great collection of a bunch of acoustic performances they did on various radio shows. This is a slimmed down version of that.

I've removed a couple of songs that don't appear in good quality elsewhere to put on my stray tracks albums for this era. I also removed any songs played here more than once. Luckily, there were only a couple of those as well.

The songs sound great, since they were recorded for radio broadcast. (One or two sound a little worse than the others. I think "Break My Mind" is one of those, if I recall correctly.) In all cases, they were recorded in front of a very small audience, maybe a couple dozen people, or without any audience at all. To keep things consistent, I removed all the audience noise. Luckily, the various audiences were always respectful of the music, letting the songs' final notes fade out before clapping and not making any sounds during the songs. So, listening to this, it would be very easy to believe there never was an audience at all. But at the same time I was able to keep the banter between songs, and there's a lot of interesting talk.

The songs are presented in chronological order. The last four songs feature Richard Thompson without Linda. He started to do some solo shows in 1981, and this is one of them. They would stay together as a musical duo through a 1982 tour.

I plan on posting a bunch of albums of the duo playing at the BBC. Some of this, maybe half, are from BBC radio shows. But I thought this holds together well as an all acoustic thing, whereas most of the other BBC performances I plan on posting are with a full band. I don't know why there's a bunch of acoustic shows from 1980 and 1981, and few from 1982 or the years before. Perhaps it's just that that person propylaen managed to save them from being lost, because I've looked over a list of all of their performances and there are many radio show appearances that seem to have been lost (meaning they're not available on official records or bootlegs).

This album is an hour and ten minutes long.

It's so damn hard to find good color photos of this duo. To make this album cover, I had to get creative. I found a high quality video recording of them (I forget which one). I took a screenshot of Linda, then another screenshot of Richard. Then I edited them in Photoshop to make it appear that they both were in the same shot at the same time.