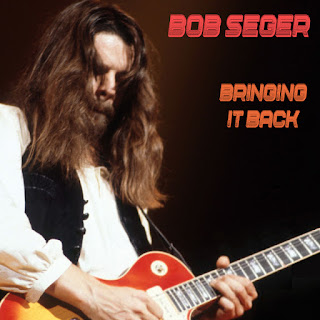 As I mentioned in a previous post, I'm not that big of a Bob Seger fan. I mostly like him on the hits only level. So I'm pretty damn surprised that I ended up making a stray tracks album for him, and equally surprised that it's quite good. If this were an actual album, I think it would be one of his best.

Seger certainly has written many quality hits and even some all-time classics. But my main issue with him has been consistency. I've found the songs on his studio albums hit or miss, with a lot of a misses. What makes this album, in my opinion, is that it's nearly all covers. Only the last song is an original. Like all the other songs here, it's never been officially released in any form.

Seger spent many years in the late 1960s and early 1970s playing small clubs and getting people to dance with his rocking music. Along the way, he probably played many more covers than originals, to give the audience more songs they were familiar with. He put out an album mostly consisting of covers in 1972, "Smoking O.P.s," but I actually like this one better. This comes right at the brink of his stardom, when he would drop most covers from his concert sets.

Luckily, there were a couple of concerts that were professionally recorded for radio stations and saved as bootlegs right before he retired most of these songs. I had no intention of making this album, but I happened to stumble across it while getting material for the Seger early best of albums I posted here recently, and I was intrigued enough to find more songs to fill out the album.

All the songs were recorded live in concert, but I removed the audience noise, as I often do, to make this sound like a studio album. The sound quality is so good, and the audience was so quiet during the songs, that I was able to do that.

By the way, this comes from right before he formed the Silver Bullet Band he would find fame with. Most of the songs are with the short-lived Borneo Band. But for simplicity's sake, I'm just crediting all the songs to Bob Seger.

The cover art photo dates to 1972, though I don't know the details.