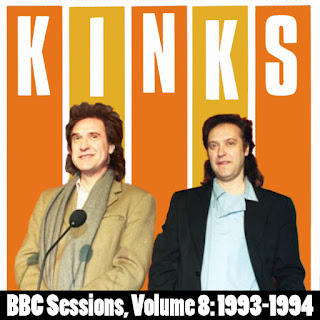 Here's the last in my long series of albums of Kinks performing for the BBC. (Keep in mind that I recently renumbered and added to the series prior to this, which is why I suddenly went from having four albums in the series to eight.) This is the end of the road, because the Kinks put out their last studio album in 1993, "Phobia," then ceased to exist around 1996.

For whatever reason, it seems the Kinks didn't make many promotional appearances for all of the 1980s and into the early 1990s. But that changed with the release of "Phobia." They did their first BBC studio sessions since the 1970s, and other similar appearances. Nine out of the 15 songs here (including the bonus track) are BBC performances that were included on the "At the BBC" box set. The rest are all officially unreleased. But they sound very good because of how they come from good recordings of TV and radio appearances.

The previous album in this series, "Volume 7," has four songs from Phobia on it. This has four more, plus two other new songs, "House of Blues" and "To the Bone." The other eight songs are all versions of older classic Kinks hits.

I have one bonus track, but for once it's not a bonus track due to sound quality issues. Instead, the problem is that the "At the BBC" box set included two very similar versions of "Til the End of the Day," since the song was played at two BBC sessions. One of them is plenty for me. So I've included the second one as a bonus track since it's from the box set and maybe some people don't mind two versions of the same song.

Till the End of the Day (Kinks)

Good color photos of the Kinks from 1993 or 1994 are surprisingly hard to find. I ended up using a photo of just brothers Ray and Dave Davies, even though there still were others in the band at the time.