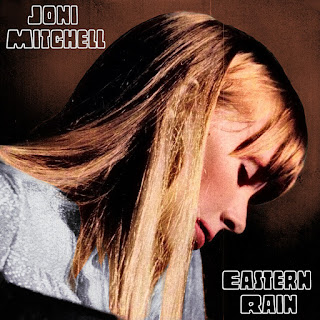 About two years ago as I write this, I made two stray tracks for Joni Mitchell's early songs, the vast majority of them unreleased originals. In late 2020, the box set "Archives, Volume 1" was released, allowing most of these songs to be officially released for the first time. That contained a bunch of songs that had never even been bootlegged before, so many of them that I was able to turn those two stray tracks albums into three. Technically, this is the new one, but if you're interested in this material, you really need to get the revised versions of the other two. The songs I had on them have been jumbled around and mixed in with new songs and new versions of songs on all three albums.

Here's the link to the other two:

Furthermore, I have an album called "Born to Take the Highway - On TV and Radio." It consists of TV and radio appearances from the same time period as these three stray tracks albums. That changed drastically as well due to the box set, so you should get the revised version of that one too:

All the songs are originals, with the exception of "Sugar Mountain" by Neil Young. The fact that Mitchell covered this song is surprising because Young wasn't well known in 1967, and "Sugar Mountain" wasn't even released yet. It would only come out as an obscure B-side in 1968, and not get on an album until the "Decade" retrospective in 1977. But Young played it for her and she liked it so much that she was inspired to write "Both Sides Now" to continue with the themes expressed in his song.

All but one of the songs here were taken from the box set. The exception, "Blue on Blue," is included on the box set, but I prefer a concert bootleg version of equal sound quality. Speaking of sound quality, the songs "Gemini Twin" and "Sugar Mountain" have some hiss on them. There had been even more, but I used some noise reduction to lessen it. I edited the song "Born to Take the Highway" because this version is from a concert, and she had some spoken asides in the middle of the song in an attempt to get the audience to sing along. I edited out those spoken bits.

The bonus track "The Wizard of Is" remains unreleased, and I have to say I very much understand why it wasn't included on the box set. It would be a nice song, until you realize how similar it is to "Suzanne" by Leonard Cohen. She certainly would have been familiar with that classic song. Heck, she even got to be friends with Cohen in 1967. I'm guessing "Suzanne" sank into her subconscious and she didn't realize how much she was copying it when she wrote "The Wizard of Is." I consider it a song best forgotten due to the embarrassing similarity, but I'm including it here for the sake of completeness.

The Wizard of Is (Joni Mitchell)

For the cover art, I wanted to use a very early photo of her. I could only find one that definitely comes from 1966. Luckily, it's a good one. It was taken at the Riverboat night club in Toronto, Canada, in November 1966. Unfortunately it was in black and white, but I colorized it.