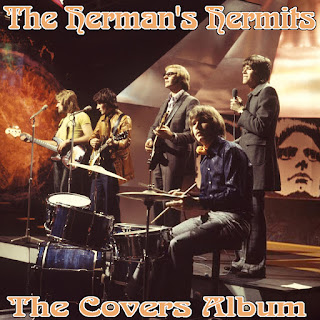 I'm psyched to be presenting this, even though it's from the notoriously uncool band Hermit's Hermits. It turns out that in 1968, Herman's Hermits planned to release an album made up entirely of cover versions of well known songs. It never was released, probably because the band's commercial fortunes were rapidly declining in the late 1960s. Every song here remains officially unreleased, so this is a true "lost album." I think it's pretty darn good, especially if you're into the "sunshine pop" genre. If you're into this type of music at all, you should give it a listen.

I know you're probably thinking, "Herman's Hermits?! What the hell?!" It's true they have a bad reputation as an inconsequential and lightweight pop group from the 1960s. And there's some truth to that, for sure. But I've been putting together material for a series of BBC albums from them, and I've been pleasantly surprised by what they did for the BBC, which is often superior to their studio recordings. I plan on posting those BBC performances soon. This is going to serve as a kind of teaser, because most of these songs come from their BBC sessions, though some do not.

Here's what I know about their covers album. Apparently, in 1968, the band recorded about 50 (!) songs for a proposed cover album. None of them have ever been officially released, nor have any of their BBC performances. But some have appeared on bootlegs, so I've collected everything I could find. Twelve of the songs are from BBC sessions. I'll be including them on BBC albums as well, but I figure they can do double duty here too. I'm not sure if all of these were part of the covers album, but I included all the covers they did at the BBC from mid-1967 to early 1969.

Seven more songs from the covers album have leaked out in other ways. Most of these were played on the "Come to the Sunshine" podcast by Andrew Sandoval in 2012. Unfortunately, all of these songs were cut off about two-thirds of the way through. In each case, I did my best to restore the missing parts, usually by repeating verses and/or choruses from earlier in the song. Generally, there was just enough to make this work, with the versions generally going just past the second verses. But for the song "Friends," the end of the second verse got cut off. So if you listen carefully, the last word is actually from the end of the first verse.

I had a similar problem with the BBC performances. In almost every case here, a BBC DJ talked over the starts or ends of the songs. I think I did a pretty good job of restoring the missing bits though, usually by patching in sections from later in the same song.

In terms of the music, I think the band made some excellent choices which they do well in their poppy style. They sound a lot like the Association on many of these songs, with lush harmony vocals. This band was nowhere near the cutting edge, but even so, I was pleasantly surprised to see them do songs by the likes of Buffalo Springfield, Tim Hardin, and Jeff Beck. You don't have to be a fan of Herman's Hermits to enjoy this; just a fan of 1960s pop music in general.

If the band really did record 50 songs for their covers project, that could have easily been a double album with some songs left over. As it is, I was only able to find 47 minutes worth of music. But that so happens to end up being the length of generous single album from that era, so that works out rather nicely.

The cover art shows the band playing on an unknown TV show in 1968. I'm very glad to have it as the cover, because it shows the band bending ever so slightly to the prevailing cultural winds of the late 1960s, especially with the background imagery, while staying somewhat square. That perfectly describes their music on this album too.