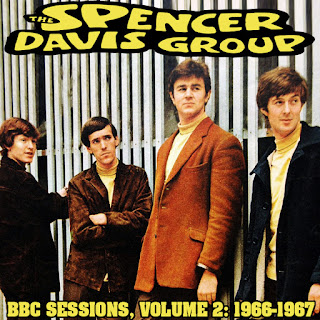 Here's the second and last album of the Spencer Davids Group performing for the BBC. As I mentioned in the previous post, this basically was Steve Winwood's group right before he formed Traffic. However, their material was much more overtly based on soul music.

Most of what I said in the post for Volume 1 holds here for Volume 2. Once again, the sound quality is excellent, even though it's a mix of released and unreleased material. In fact, this volume has more unreleased performances than released ones.

And, once again, many of these songs had BBC DJs talking over the intros. There were eight cases of that here, which I have fixed. Using the audio editing program X-Minus, I wiped out the talking while keeping the underlying music.

Pretty much all of the songs on Volume 1 were songs the band did on albums or singles. But there are some songs the band did on this album that they didn't record elsewhere, as far as I can tell. That includes "Rambling Rose," "Mess Up a Good Thing," "Oh Pretty Woman," and "That's All." Also, note that "Oh Pretty Woman" is a cover of the Albert King song, not the famous Roy Orbison song.

For both this and this first album, I avoided including two versions of the same song. Luckily, there weren't many instances of those. I believe the duplicates were "Mean Woman Blues," "Midnight Train," "It's Gonna Work Out Fine," "Together 'Till the End of Time," and maybe one or two more. (I forget.) It's very fortunate that there's one version of each of their big hits, considering we don't have any instances of any of those being played twice. Also note that probably their best known song, "Gimme Some Lovin'," has some different lyrics for the third verse. (And you can actually understand more of the rest of the lyrics.)

The Spencer Davis Group kept going for many years after Steve Winwood left in early 1967. They played some more at the BBC too. But my interest is with the Winwood years, so this album stops chronologically right when Winwood left. (They did do some good stuff later, but they moved in a different musical direction and pretty much became a different band.)

The cover art comes from a 1966 publicity photo.