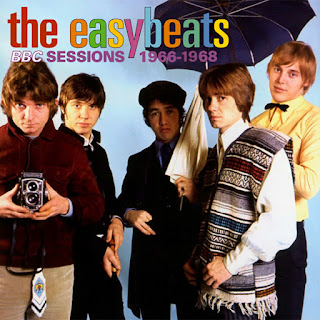 Today is kind of "Australia in the 1960s" day at this blog, because I have three albums to post from that time and place. In my opinion, a lot of good music gets missed because a particular talented artist might only be well known in one country and not another. Nowadays, thanks to the Internet and other mass communication, country borders don't matter nearly as much when it comes to music. But things were very different in the 1960s, when a musician could be huge in one country and almost unheard of everywhere else.

A good case in point is the Easybeats. They were sort of the Beatles of Australia in the 1960s, complete with lots of hits and hordes of screaming girls at their concerts. But, like the Beatles, the adulation was deserved, because they were the most talented group around. In 1966, they relocated to Britain to try to make it there too. They were only partially successful. They had one song, "Friday on My Mind," that was such a natural classic that it was a big hit in Britain and even the US. But aside from that, they had 15 hits in total in Australia and only one more in Britain.

Here's their Wikipedia article if you want to know more about them:

Luckily, for us, the fact that they spent a lot of time in Britain from 1966 to 1968 means they recorded enough performances at the BBC for a BBC collection. Unfortunately, the Easybeats have been treated shabbily by record companies, both back then and continuing through to today. There is one official album that includes most of their BBC performances, called "Live - Studio and Stage." But the sound quality for those was only okay. Thankfully, some person named Q has stepped forward and created a much better BBC album for the band. I've used the Q versions of the songs whenever possible over the official ones. I've also added five songs that Q didn't include, which are the few good TV or radio performances I could find of other songs. Some of those were done in front of audiences and have a bit of audience cheering on them.

As is usually the case with BBC recordings, many of the songs had BBC DJs talking over the music.  There were six such songs here; they have "[Edit]" in the title. I used the X-Minus audio editing program to remove the talking while keeping the underlying music.

Speaking of that song, "I Keep Forgettin'" is a cover that the band never recorded in the studio. So is "Old McDonald Had a Farm," of all things! In both cases, they spiced the songs up by adding reggae-influenced rhythms to them. "Mother-in-Law" is another cover unique for the BBC that was done in a more typical manner. And "River Deep, Mountain High" is also a cover, but one that they did an album version of. I'm not 100 percent sure, but I think all the other songs are originals, minus the "Batman" snippet in one song.

"Friday on My Mind" is a great song, an all-time classic, and chances are good you know that one. But if that's all you know, trust me, the band is much more than a one-hit wonder. As far as 1960s bands go, I have a top tier of bands with the Beatles, the Kinks, the Rolling Stones, and the Who in it. The Easybeats aren't at the level, but I'd put them on the second tier, with the likes of the Hollies, the Small Faces, the Move, and so on.

This album is 54 minutes long, not including the bonus tracks.  If you don't know the band well, this would serve as a good intro, though it's missing many of their top songs.

The band played about five songs twice for the BBC (I think the duplicates were "Friday on My Mind," "Pretty Girl," "Falling Off the Edge of the World," "Hello, Hard Are You," and "What in the World"). I'm against repeating the same song twice on an album unless there are significant differences between the versions, so I only included one of each of those on the main album. However, I've included the second versions of two songs as bonus tracks.

I don't know who this Q person is, but he or she rocks. In addition to coming up with the best versions of most of these songs, as mentioned above, Q also made some excellent cover art. I'm using that with only the minor edit of changing the text from "1966-68" to "1966-1968."