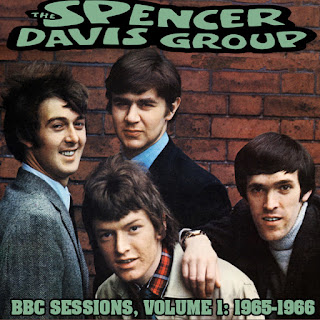 One thing I've focused on with this blog is to post music recorded by the BBC. I'm especially keen to post BBC sessions from all the important 1960s bands, due to the excellent sound quality from a time when there usually wasn't much recorded well other than the official studio recordings. Some of that has never been officially released. Or, if it has, the BBC DJs talked over the starts to many songs. I have limited sound editing skills, but one thing I can do is fix those in most cases. So here we go with another 1960s band, the Spencer Davis Group.

I feel this band is unjustly neglected. I'm guessing a lot of that has to do with the fact that they were called the Spencer Davis Group when Steve Winwood was the main lead vocalist and star. Basically, if you want to hear Winwood rip through lots of soul music covers and some originals in the same vein, this band is the place to look.

The band's BBC recordings have been somewhat neglected. There was one fairly obscure album of those recordings released in 2002, called "Mojo Rhythms & Midnight Blues, Vol. 1." But it missed many songs. Luckily, I was able to find the others with comparable sound quality. I also added three songs that technically were done live in concert: "Kansas City," "Every Little Bit Hurts," and "Stevie's Blues." But these were recorded shockingly well for the year, and sound as good as the others. I suspect they were done in a sound check type situation, because they have virtually no crowd noise. (I edited out a little bit after the songs ended.)

This band was a victim of the problem I mentioned above, BBC DJs talking over the starts of songs. Five songs here had that problem, the ones I've marked with "[Edit]" in the titles. I've used the audio editing program X-Minus to wipe out the talking while keeping the underlying music.

In most instances, the songs here are songs the band did on albums or singles, and the arrangements are basically the same. But still, they do an impressive job playing these songs live. Plus, this album, plus the Volume 2 that will follow, basically make up an excellent "best of" for the band, as it includes all their hits and the songs they enjoyed playing the most.

One song, "Midnight Train" is a bonus track only because I have another version of the song on this album, and I don't like including multiple versions. But the sound quality on the bonus version is as good as the others here.

The album cover uses a publicity photo from 1965.