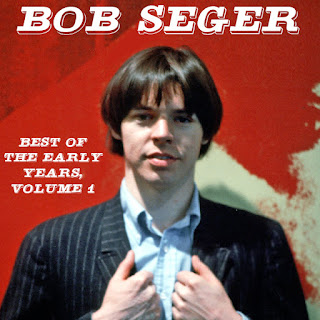 Who is the person in this album cover photo? Would you believe it's Bob Seger? Seger is well known for his many hits from the mid-1970s onwards. But what a lot of people don't know is that he had a pretty interesting musical career for about ten years before he became famous around 1975. And a key reason people don't know is because he has made it hard for people to know, due to letting all of his albums prior to 1973 go out of print.

Personally, I'm not that big of a Bob Seger fan. If I ever hear a horribly overplayed some like "Old Time Rock and Roll" it'll be too soon. As I write this, his early material remains out of print with the exception of the collection "Early Seger Vol. 1," but that only contains six songs that date from his out of print era. So I've put together two albums of what I consider the best songs from that time.

In the 1960s, the Detroit music scene was known for rocking, with bands like Mitch Ryder and the Detroit Wheels, the Stooges, and the MC5. The city kept going with the garage rock sound popular around 1965 and 1966 long after most other bands switched to different styles. Seger was very much in that vein. He put out some excellent singles from 1966 to 1968, including the minor hit "Ramblin' Gamblin' Man." Then he started putting out albums mostly in the same style.

Seger has consistently been a rocker first and foremost for his entire career, and that's true of his early material. But his early songs aren't as formulaic as his later hits. As a case in point, consider his 1968 A-side "2+2=?" It's a strident protest song against the Vietnam War. It's strange title is a reference to the classic George Orwell book "1984," where people are brainwashed into thinking that two plus two doesn't equal four.

I believe all the songs here are originals, except for "River Deep, Mountain High," originally done by Ike and Tina Turner. And "Sock It to Me Santa" is basically James Brown hit "Papa's Got a Brand New Bag" with new lyrics.

I don't know what year the cover art photo is from, but I'd guess it's from around 1967. Not long after that, he let his hair grow much longer. Then he started favoring more facial hair, until he had a full beard around the time he started hitting it big in 1974 or 1975.