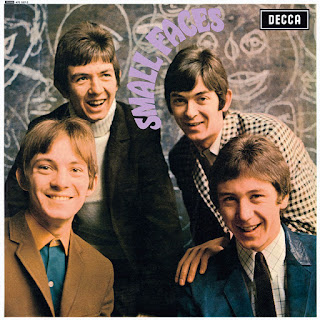 Normally, I don't post unchanged albums that aren't out of print. But I'm going to make an exception for a couple of Small Faces albums because their discography is confusing. I want to set things straight so you can gather up all their stuff without any duplication.

One problem is that there were different American and British albums for the first part of their career. I generally consider the British albums the definitive ones for 1960s bands, and that's the case here. To add to the confusion, the first album the band released in Britain was called "Small Faces," released in mid-1966. Then, in 1967, the second album they released in Britain in 1967 was called... "Small Faces." I think that was an idiotic move to give two albums the exact same name, and such a generic name on top of it.

Here's the 1966 "Small Faces." It contains the band's first two hit singles in Britain, "Sha-La-La-La-Lee" and "Whatcha Gonna Do about It." It also contains five covers, including the two hits. Although I don't know if that's really the right word, because most of those were songs written by professional songwriters for the band, so nobody else had done them before (except for "Shake" by Sam Cooke). But after this album, nearly all of the band's songs, including the other hits, would be self written.

By the way, the song "You Need Love" is credited as one of the originals, under the name "You Need Loving," but that's not right. It really is a Willie Dixon song with only some minor changes, first performed by Muddy Waters in 1963. Interestingly, the Small Faces version of this song was copied by Led Zeppelin and morphed into their huge 1969 hit "Whole Lotta Love." Both Jimmy Page and Robert Plant went to many Small Faces concerts, so they definitely were very familiar with the song. Plant later apologized to Small Faces lead singer Steve Marriott for copying the Small Faces arrangement so closely without credit. And eventually a lawsuit resulted in Willie Dixon being added as a cowriter to "Whole Lotta Love."

The cover is the official cover without any changes.