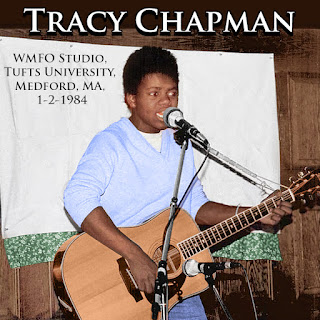 Here's something I'm excited to present.  In 1988, Tracy Chapman's debut album, simply called "Tracy Chapman," was released. It was an instant classic, going on to sell over 20 million copies worldwide, making it one of several dozen of the best selling albums of all time. I think that album and her second one are by far her best albums. Over the years, I got the suspicion that she had dozens of songs she'd written in the 1980s that she never released. Even decades later, there haven't been any archival releases or deluxe editions or the like. I've posted an album of unreleased songs she played in concert from 1988 to 1991, which I called "Where the Soul Never Dies," and in my opinion that also is some of her best work. But almost no recordings of her prior to her 1988 debut have been publicly available.

Until now, that is. I recently came across this radio show on a torrent site of concerts bootlegs. It was from earlier this year (2021), so maybe it hasn't been publicly available prior to that. I don't know, but it's been extremely low profile in any case. Even now, if you Google anything about this show, almost nothing comes up.

That really surprises me, because it's great! It dates all the way back to 1984, four years prior to her debut album, at a time when she was a musical unknown. But it's as I suspected: this early work of hers is some of her best. There are many unreleased songs by her, and they are really good. Consider this includes songs like "Talkin' about a Revolution" and "Baby Can I Hold You," two of the most popular songs on that debut album that sold all those millions of copies. She clearly had serious songwriting skills even prior to 1984. But those two, plus "Born to Fight," which would appear on her second album, are the only songs to be released later. There's another 12 songs still unreleased. I think Chapman is making a big mistake keeping all this early work of hers unreleased and unheard.

At the time, Chapman was a student at Tufts University, and WMFO was the college radio station. It sounds like one of the DJs had her on for about an hour, interviewing her and letting her play her songs on acoustic guitar. I've edited this slightly to remove some of the unnamed DJ's comments, while keeping all of Chapman's comments. Her talking is interesting, but the vast majority of the time is her singing and playing her songs. Most of them are pretty short, so she manages to do 15 songs in only 42 minutes, including time for the talking too.

I made a few minor changes to improve the listening experience. There was a certain amount of hiss throughout the show. I used noise reduction to greatly reduce that, but only during the talking tracks. I found that the hiss was hardly noticeable at all once she was strumming her guitar, so I didn't change anything there.

Also, whoever recorded the show clearly turned the tape recorder off and on between songs sometimes. I strongly suspect there's more talking that got lost. I know this because sometimes the recording stopped in mid-sentence. I made some edits to salvage as much of Chapman's comments as possible. For instance, if she said, "...is a song I wrote..." and from context one can figure out she started the sentence with "This," I would find another instance from the show when she said "this," and patch it into the sentence, allowing one to her "This is a song I wrote..." I'm pretty sure I made these edits so carefully that you won't even notice them.

Anyway, if you're a Tracy Chapman fan at all, this is a must have. The sound quality is surprisingly good for being something this early in her career. Plus, you have all those unreleased songs. I believe two of those songs are also included in different versions on my early stray tracks album "Where the Soul Never Dies" mentioned above, "My Sweet One," and "Missile Blues." But the other ten don't seem to even have been bootlegged on anything else.

That makes me think there probably are even more quality early original songs of hers that remain frustratingly obscure. If you know of others than the ones here and on "Where the Soul Never Dies," please let me know so I can hopefully share them with others.

As I mentioned, I'm very psyched to find this early music of hers, so it's only fitting that I had another stroke of luck and found a worthy early photo to use as the cover art. By chance, the only really early photo of her I could find is from a 1984 newspaper article about her. It was in black and white, so I colorized it. There also were some large letters on that big white piece of paper on the wall behind her. It wasn't enough to make sure what was written there, but I found the letters distracting, so I used Photoshop to make them disappear.