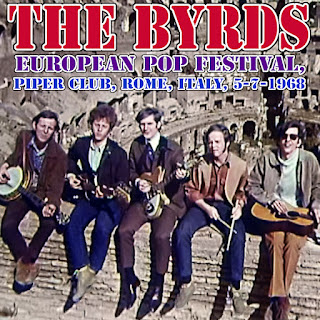 The other day, I posted the Pink Floyd album "Live in Europe 1968" which included some songs that band did for the European Pop Festival in Rome, Italy. That reminded me that the Byrds played that festival too, and that I hadn't posted that yet. So here it is.

Unfortunately, the earliest and best years of the Byrds are very poorly represented when it comes to live recordings. I've posted an album of the band's live songs from 1965 to 1967, but it's a matter of a song here and a song there. The first good sounding concert we can hear comes from the 1967 Monterey Pop Festival. I'm not posting that here because it's widely available as part of an official release for the whole festival. But the disappointing thing about that concert is that the Byrds' set is only 22 minutes long.

This is the next good recording. It only exists on bootleg. The sound quality is good for its era. But unfortunately it's rather short too, at only 27 minutes long. It's also incomplete. According to setlist.fm, the first two songs they played were "You Ain't Going Nowhere" and "Old John Robertson," which aren't here.

But hey, half a loaf is still better than no loaf at all. It's true that David Crosby was no longer part of the Byrds by the time of this concert. But the legendary Gram Parsons was. (He sang lead on "You Don't Miss Your Water" and "Hickory Wind.") Furthermore, the band was augmented by Doug Dillard of the Dillards on banjo just for this show. You can hear a fair amount of banjo on the recording if you pay attention. The full band line-up was Roger McGuinn, Chris Hillman, Gram Parsons, Kevin Kelley, and special guest Doug Dillard.

The Byrds released their seminal country rock album "Sweetheart of the Rodeo" in August 1968. This concert was in May. But they'd already mostly finished recording that album, and they were moving into country rock mode, playing four songs from that album (three of which are on this recording).

The bonus track is rather out of place with the rest. This song, "Milestones," was a jazzy instrumental Miles Davis cover. It was recorded at the Winterland in San Francisco on December 9, 1967. It's only a bonus track because the sound quality is poor. But I figure it's the one thing worth saving from that bad bootleg, because it's a song the band never released.

I'm psyched about the album cover I made here. I never thought I would find a photo of band from this exact concert, because any photos of the band in concert around that era are pretty much nonexistent. And I didn't... but I came close! Apparently to help promote this festival, the Byrds lipsynced their way through the song "Mr. Spaceman" while posing in different spots in the Coliseum in Rome. I found a video of this and took a screenshot.

The picture quality isn't exactly the best, but hey, it's them in Rome from their trip there to play this concert. The picture even has guest Doug Dillard in it. From left to right: Dillard, Hillman, McGuinn, Kelley, and Parsons. The image was really bleached out, but I used some Photoshop tricks to give it more color and contrast.