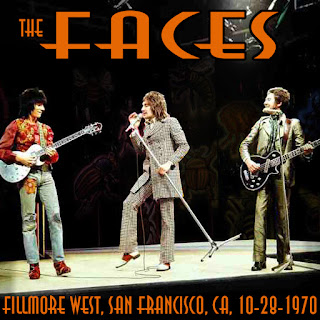 I thought I had posted all the Faces music here that I wanted to post. But then I got to thinking about what the sound editing programs Spleeter and X-Minus could do. I remembered a Faces concert from 1970 that sounded great except for the fact that the vocals were too low. That's something that can be fixed now, so here it is.

This is an audience bootleg, but one of those rare ones that sound really good. It had two big problems, but I believe I fixed them both. The first one is the low vocals that I already mentioned. I've boosted those for every song. The second one is that, because it's an audience bootleg, there was a lot of audience noise during the songs. For slow blues songs in particular like "Devotion" and "Blues Deluxe," there were many "Woo-hoo!" type shouts all through the songs. But don't worry, because I was able to split the vocals onto a separate channel using X-Minus, then I erased dozens of such shouts as I came across them.

The end result is that this sounds even more like a soundboard. It also suggests what can be done with cleaning up many other bootleg recordings. I hope other people will see the potential of these new programs and start using them for purposes like this.

When the Faces released their first album in early 1970, "First Step," it was credited to the "Small Faces" in the US and Canada, but just the "Faces" everywhere else. Apparently the thinking was the band wasn't well enough in North America yet to use their own name. This concert took place about half a year after that album was released, but they were still billed as "Small Faces" for it. You can hear Rod Stewart refer to themselves as that in some between song banter. Despite that, I'm billing them here just as the "Faces," since they became widely known with that name.

One really nice thing about this concert is that it's unusually long. All the other ones I've posted by the band range from about 40 minutes to an hour and 20 minutes, but this one is nearly two hours long. (An hour and 51 minutes, to be precise.) I suspect that's because there was no opening act, so they played longer to give the audience enough bang for their buck. Stewart even complained about the lack of an opening act in his talking between songs.

If you can think of any other recordings that have systematic problems, such as vocals too loud, or too low, or bass too loud, etc, please let me know. It's possible such things can be fixed.

As usual when it comes to the Faces, I had to scrounge around to find a decent color photo to use for the cover. I found one from a TV appearance in 1973. I would have much preferred something from around 1970, but at least Ronnie Lane was still a member of the band. From left to right, that's Ron Wood, Rod Steward, and Ronnie Lane.

This photo was marred by colorful drawings of large insects behind the band members. (I used another photo from this same appearance on the "BBC Sessions, Volume 7" album, so you can see what I mean there.) It was really distracting in this particular photo, so I used Photoshop to darken the background to the point that the weird insects can barely been seen. I would have liked to include the other two band members (Ian McLagan and Kenney Jones), but they weren't included in the photo.