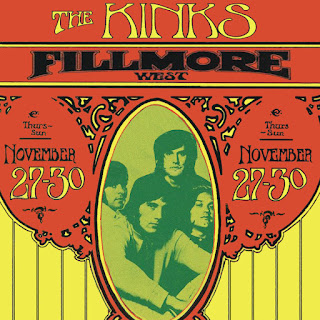 I've had this concert bootleg for a long time, and I came close to posting it here a year or two ago, but I decided against it due to sound quality issues. Good, but not top notch. However, thanks to the sound editing programs Spleeter and X-Minus, I was able to improve this somewhat. Note that "somewhat" is just that, somewhat; it hasn't been totally transformed into sounding like a pristine soundboard. But, it's better than ever before.

The Kinks are my second favorite musical act (behind only the Beatles), and my favorite time period for them is the late 1960s. Although they toured in 1967 and 1968, those concerts seem to have fallen into a memory hole, with no official releases or bootlegs. This 1969 recording is the one decent sounding live show from them. Some say this is a soundboard. I highly doubt that, but even if it is, it sounds like a good audience recording.

One problem with it is that the sound quality varies. If you look at the title of this post, you'll see the date I list is "11-27-29-1969." That means it was recorded on multiple nights, on November 27th, 28th, and/or 29th. The second half of this sounds a bit rougher. Starting from "Love Me Till the Sun Shines" until the end, I used X-Minus to boost the vocals somewhat. I also enlisted the help of my musical associate MZ, who improved the equalization, especially by reducing the overly loud bass.

I made a number of other changes here and there. One problem the show had is that the taper obviously turned the tape off and on at times. Happily, some of the between song banter was captured. But sometimes, the start of a song was missed. That was the case with the start of "Victoria," for instance. I replaced that missing material by patching in some music from a bootleg of a Boston 1969 concert. (More on that concert later.) In more cases, there wasn't any applause after a song, or there wasn't much, due to the tape getting turned off. Again, I generally used the audience reactions to other songs from that Boston show to fill in the missing pieces.

I believe the version of "Brainwashed" here was the first part of a medley then went to "Milk Cow Blues," "See My Friends," "Tired of Waiting for You," and then back to "Brainwashed." However, there almost certainly is a missing chunk of most of "Milk Cow Blues." I didn't have any good material to fill in that, so it still has that flaw.

I did manage to fix other problems though. For "Big Sky," the chords were badly flubbed the first time the chorus came around. So I patched that up using a bit of the next chorus. For "Love Me Till the Sun Shines," "You're Looking Fine," and "Victoria," there were skips of a second or two. I patched those up as well.

One thing to consider is that the Kinks weren't popular at the time, especially in the US where this concert took place. They hadn't had a hit in the US since 1966, which was eons in those days, and they hadn't been able to tour the US since 1965, due to a union dispute. For many, they were considered washed-up and badly out of step with music trends, much like the Herman's Hermits or the Searchers around the same time. In retrospect, the band's two most recent albums, "The Village Green Preservation Society" and "Arthur," are considered some of the best albums of all time. But very few people bought them. The band's fortunes would change drastically one year later with the big hit "Lola," but that hadn't happened yet.

As a result of all that, the Kinks were probably an opening act facing a largely indifferent audience. You can see this in some of lead singer Ray Davies' comments between songs. For instance, before playing "You Really Got Me," he suggests that one song the audience might actually know already. And although they did play three songs from the latest album "Arthur" ("Mr. Churchill Says," "Brainwashed," and "Victoria"), it seems the reaction wasn't that good, because he commented that he didn't think the audience was ready for them. The band's lack of popularity probably also explains some song choices, like a cover of the chestnut "Louie, Louie."

I mentioned a Boston concert up above. That took place a month earlier, on October 25, 1969. The bootleg I have for that largely contains the same songs, but with slightly inferior sound quality. However, it varies too, and some sound as good as this one. The band played two great rarities for that show, "Don't You Fret" and "Fancy," and luckily those were cases where the sound was pretty decent, so I've added those as quasi-bonus tracks at the end. "Fancy" in particular is very interesting, and considerably longer than the 1966 album version.

The Fillmore portion of this concert is 57 minutes long. If you add in the two extra songs from Boston, the total is an hour and five minutes. It's true isn't not all from one concert, and in fact we don't even know for sure which songs are from which dates, but this is the best of the best of the known 1969 recordings (unless you count BBC material, which I consider different).

Of course, many of these songs would be played in later years with better sound quality. But if you're a big Kinks fan like me, you'll be amazed to hear live versions of songs like "Big Sky," "Mr. Churchill Says," and "Fancy."

For the cover art, I used a poster of the exact series of shows featured here. I did that partially because finding a good color concert photo of the Kinks in 1969 is next to impossible. But also, it's fitting because this concert is some mix of recordings from three shows, November 27th to 29th, and the poster is from the whole stand of November 27th to 30th. That's one day different, but it's pretty darn close.

Since it was a rectangular concert poster, I had to crop out a big chunk of it at the bottom. I made other changes too. The Kinks were co-headliners with Taj Mahal, and Sha Na Na was on the bill too. So I removed those names from the top of the picture. Also, the middle photo originally looked just like this, with the green coloring, except Taj Mahal was pictured there too. So I found the photo used for that and redid it with just the Kinks in there.