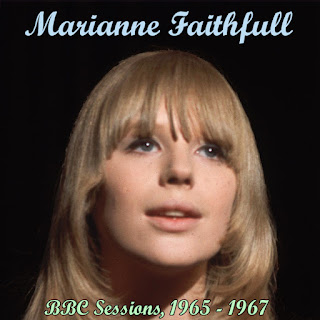 I have to admit I'm not a big Marianne Faithfull fan. However, I'm keen to post all the worthy 1960s BBC albums that I can, since there hardly seems to be anyone else so far removing the BBC DJ talking over the music. Expect to see many more such BBC albums in the near future.

Faithfull's music career had a remarkable transformation. She started out in the mid-1960s with some hits that relied on her pure and high voice. But in the late 1960s she got heavily involved with drugs. Maybe it was that, or smoking, and/or other factors, but her voice changed drastically, dropping at least a full octave by the end of the decade! By the time of her big comeback album "Broken English" in 1979, her voice had become so low and gravely compared to what it was before that it's remarkable to consider it's the same person.

This album entirely dates to that earlier time when her voice was sweet and high. So if you only know her from her later era of more sustained success, prepare to be surprise. The style of music is drastically different too.

All the music here is officially unreleased. Eight of the 14 songs (plus the bonus track) that actually come from the BBC had the problem of BBC DJs talking over the music. (I'm looking at you yet again, Brian Matthew.) I used the X-Minus audio editing software to wipe that talking out while keeping the underlying music. Those are marked with "[Edit]" in the titles.

I've added three songs at the end that aren't from the BBC. "Plaisir d'Amour," sung in French, was broadcast on French TV in 1966. "Sadness" is from an obscure 1966 movie. And "C'e Chi Spera," sung in Italian, was from an Italian music contest and broadcast on TV.

The one bonus track sounds as good as the others. It's a bonus track because I don't like having two versions of the same song on one album, and that's the second version of that song.

Go Away from My World [Edit] (Marianne Faithfull)

The cover photo of Faithfull dates to 1965, but I don't know anything else about it.