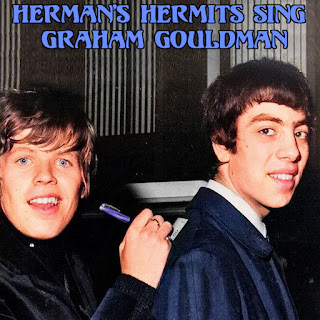 Here's something I made for myself, but since it exists I figure why not post it? The Herman's Hermits are very uncool these days, but maybe there a few people who appreciate this.

I consider Graham Gouldman to be a great songwriter. In fact, I've already featured him in my "Covered" songwriter series. It turns out that in the 1960s, no musical artist covered his songs more than the Herman's Hermits. There's just enough for a reasonably long album, so I've put one together.

The Herman's Hermits had a big hit with his song "No Milk Today," and some other minor hits by him. But they liked his material so much that they covered some of his songs that were big hits for others, like "For My Love," "Bus Stop," and "Tallyman." The only two big 1960s of his they didn't do were "Evil Hearted You" and "Look through Any Window."

Oh, I also posted this album so I could make an announcement for the other three Herman's Hermits fans out there: I recently redid all the albums by them that I'd previously posted at this blog. That means the four BBC sessions collections, plus "The Covers Album." I specifically redid all the BBC songs that had DJs talking over some of the music. Thanks to new sound editing programs like Spleeter and X-Minus, I could completely erase that talking while keeping all of the music, so that's what I did.

Say what you will about the Herman's Hermits, but Gouldman's songs are very creative and tuneful, and this band knew how to do them well.

This album is 36 minutes long. A couple of the songs - "Bus Stop" and "Tallyman" - are BBC versions, but the rest are from albums or singles.

I consider myself quite lucky to find a photo of Gouldman with Herman's Hermits lead singer Peter Noone. It looks like Noone is signing a card on Gouldman's back. The photo I found was in black and white, but I colorized it.