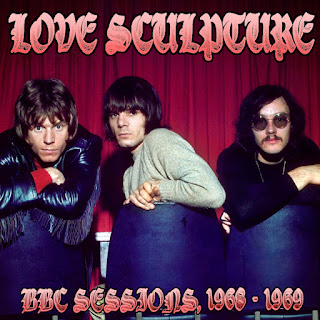 I'll explain more in another post soon, but suffice to say that I plan on posting lots of BBC session albums in the near future. This is a collection of all the BBC sessions from Love Sculpture. If you haven't heard of them, you've probably head of Dave Edmunds, who had a long successful solo career, as well as being part of the band Rockpile with Nick Lowe in the late 1970s. He led this band in the late 1960s.

Love Sculpture has a fairly small musical footprint, because they were only together for two albums, plus a couple of non-album singles. Furthermore, there doesn't seem to be any live recording of them publicly available, either officially released or on bootleg. So this is probably the closest we'll get to hearing them live, as they played live in the BBC studios.

This is a bootleg, but the sound quality is excellent. Furthermore, we're lucky as it seems the BBC DJs didn't talk over any of the music.

This collection also adds significantly to their small discography, because some of the songs here were otherwise never released by them in any form: "Do I Still Figure in Your Life," "Sweet Little Rock and Roller," "Promised Land," "Evening Blues," "The Inner Light," and "Great Balls of Fire." And yes, "The Inner Light" is a version of the obscure Beatles B-side, though done in a very different (and quite interesting) arrangement.

Edmunds went solo in 1970, and immediately had a hit with "I Hear Your Knocking." As far as I can tell, he never did any studio or live BBC sessions as a solo artist, at least not until years later with Rockpile. I also didn't find any instances of them performing on TV or something like that. So this is everything that fits.

UPDATE: On July 9, 2022, I updated the mp3 download file because I added two songs. These are by Dave Edmunds solo, after Love Sculpture broke up. Thanks to a commenter named Marley, I was able to listen to all of Edmunds' songs played for the BBC in the early 1970s. Unfortunately, most of them turned out to be identical to the album versions. That makes sense, because Edmunds didn't have a band at the time, and recorded all the instruments and vocals for his songs in his home studio. But "I Hear You Knocking" was different, and "The Three Armed Poker Player Liver Rat from New Orleans" is a song that was never released by him in any form anywhere. Presumably that was another one he did at home but gave to the BBC.

For the cover art, I used a promo photo from 1969. The colors seemed off, with their skin looking inhumanly pale, so I made some tweaks in Photoshop to hopefully improve that.