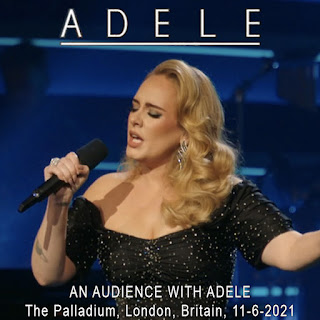 I think a lot of popular music these days sucks. That's not to say there isn't plenty of good new music being made, but to my ears, the more popular it is, the less I generally like it. However, there are exceptions. Adele is massively popular, selling tens of millions of albums. She clearly has an incredible voice, but she also is a talented songwriter, and she doesn't ruin her music with bad production.

I'm particularly impressed with her most recent album, "30," which was released earlier this month as I write this (in November 2021). I thought her previous albums were bogged down by too many sad ballads, but she varies the tempo a lot more on this one, and her songwriting has improved even more.

I won't post that album here, because that would be against my policy on posting widely available and unchanged albums. However, she performed a couple of concerts to promote her new album. One of them was filmed in Los Angeles and broadcast on US TV. The other one was filmed in London and broadcast on British TV. I came across an excellent bootleg recording of the London show, so I'm posting it here.

Both TV shows were not just typical concerts. The US show alternated between concert footage and an interview Adele did with Oprah Winfrey filmed at a different time and place. The British show was all from the concert, but at five separate points, there were extensive sections in which Adele took questions from the audience. And instead of fielding questions from ordinary people, all the questions came from stars like Samuel Jackson, Alan Carr, and Emma Thompson.

I want this to be an album with replay value. I think having all those question and answer sessions bogged down listening to it as a musical experience, so I cut them all out. However, I left in whatever talking Adele did between songs when it was just her talking to the audience.

As a result, this ends up sounding like a typical concert after all. However, it's rather short as concerts go, at only 52 minutes long. But if you're not familiar with her music, this is a great place to start. She played the best songs from her new album, as well as her biggest hits from previous albums.

For the album cover, I used a photo taken at the concert in question. I also copied her name from some of the show's promotional material. I then wrote the bottom text using a similar font.