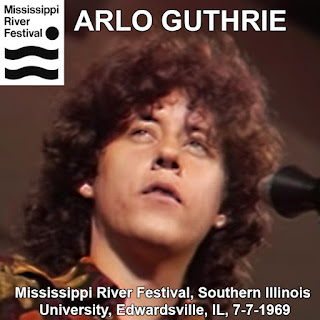 Here's the first of two closely linked concert albums. In 1969, Arlo Guthrie and Joni Mitchell were the two headline acts for the first annual Mississippi River Festival. This summer concert series would run until 1980. The entire sets of Guthrie and Mitchell were broadcast on public television, for a show called "Sounds of Summer" that had TV host Steve Allen introducing and sending off the acts. Due to that broadcast, both sets were professionally recorded.

I had known about these two concerts for a long time, but I hadn't been that interested in them. The sound quality of what I heard was good, not great. I put the rare songs Mitchell did on one of my stray tracks compilations, but that was it. However, I recently came across a better version that first emerged in the last year or two. It's a high quality soundboard.

So here's the Arlo Guthrie set. The Joni Mitchell one will follow. Guthrie played with a small band, while Mitchell performed in solo acoustic mode.

By the way, here's a fun fact about the 1969 Mississippi River Festival. It turns out that the Band played in the festival a week after the night starring Guthrie and Mitchell, and they were joined on the encore for three songs with Bob Dylan. (The songs were the covers "I Ain't Got No Home," "Slippin' and Slidin'" and "In the Pines.') This is interesting because Dylan made so few concert appearances from the end of 1966 to the start of 1974. Unfortunately, it seems there's no known recording of this.

In my opinion, Guthrie's most interesting music dates from the late 1960s and early 1970s. But there isn't much live music from that time. His 1968 album "Arlo" was recorded live, but I consider that more like a studio album, since it contained his latest batch of new songs. His Woodstock set has finally been released in good sound quality in recent years, but you have to buy a box set with something like 35 discs in order to get it. And in 2009, he released an album called "Tales of '69," which is an excellent sounding concert from some unknown date and location in 1969. Then there's this. Other than this stuff concentrated in 1969, there isn't much of his live music available from that time period, not even on bootlegs, especially not with this sound quality.

If you like Guthrie but don't have the "Tales of '69" album, you should give that one a listen. One nice thing about this show is that it's mostly different from that one, despite probably being recorded only months apart. The only two songs that are the same are "The Motorcycle Song" and "Coming into Los Angeles."

Although the sound is very good here, there was a fair amount of hiss. For the actual songs, the hiss is drowned out by the music, so I didn't consider it a problem for those. But I used some noise reduction and other tricks to reduce it only on the talking tracks, because it was much more noticeable during the quiet moments there.

I'm not a big fan of the Steve Allen talking parts, though I suppose they are culturally interesting. For the sake of completeness, I left them in. For the first part of his intro, there was some cheesy lounge music playing in the background, but I removed that using the Spleeter editing program.

Another fun fact: I was Googling Steve Allen just now, and I found out he was quite a musician himself. He claims to have written over 8,000 songs! Many were covered by others, and some became minor hits. He also released over 40 albums, mostly jazz, but also some poetry and some comedy. Turns out he was much more talented than I'd realized. So maybe he had more appreciation for Guthrie and Mitchell than other TV stars from his generation.

This concert is 56 minutes long, including the Steve Allen bits.

By the way, if anyone knows the name of the unnamed bluegrass tune, please let me know so I can fix the song list.

I don't know if the complete performances of Guthrie and/or Mitchell are publicly available anywhere, but there's a 20 minute long YouTube video that has a few songs from each of them. I took a screenshot of Guthrie from that for the album cover. I also added the actual 1969 festival logo at the upper right corner.