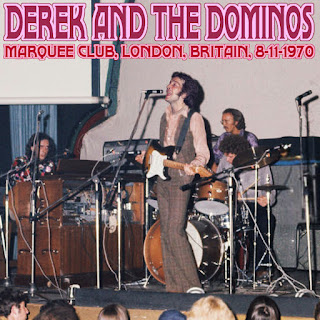 I'm a very big fan of live Derek and the Dominos music. I think Eric Clapton was at his career peak, both as a performer and a songwriter, plus the band had special chemistry. Unfortunately, the band wasn't in existence for long, and there aren't a lot of recordings with excellent sound quality. The best of the best has to be the Fillmore shows, which have been released in part on official albums and have been posted in full on this blog. Aside from that, it's all audience bootlegs, with the sound quality generally ranging from okay to terrible.

So I'm beyond delighted to be posting this bootleg. This recording from the Marquee Club has been a known bootleg for many years. But just last month as I write this (in November 2021), a new version emerged with improved sound quality. Previously, I hadn't considered this good enough to post at this blog, though I did use four songs from it for the "Live and Rare" compilation album I made. But now I'd say not only is it worthy, but this is arguably the best sounding Derek and the Dominos live recording outside of the Fillmore shows.

It's especially nice to have this with improved sound quality, because it's the only quality recording from early in the band's short career, before they recorded the classic "Layla" album. Starting in early August 1970, the band played three weeks of concerts in England. Nobody had heard of "Derek and the Dominos" at that point, and Clapton specifically forbade the use of his name on all promotions of these shows. Clapton later commented, "no one knew who we were, and I loved it. I loved the fact that we were this little quartet, playing in obscure places, sometimes to audiences of no more than fifty or sixty people." (Less than a year earlier, he had played huge arenas as part of Blind Faith, including headlining a concert in London that drew 100,000 people.)

This very concert was apparently recorded as a soundboard, but somehow it got lost or erased, and all that's left is an empty box. But although this is recorded well, it clearly is an audience recording, not a soundboard.

It has some typical audience bootleg problems, including the fact that only part of the concert was recorded. There was an early show and a late show. "Bad Boy" was the last song of the early show. That would make the early show merely 30 minutes long. Almost certainly there was more before the first song here, but we don't know what that was. Also, the last song, "Don't Know Why," fades out in the middle of a solo. It's highly likely the taper ran out of tape, but the recording fades out to make the ending less jarring. The portion of the late show is only 24 minutes long, which also suggests there's a good chunk that didn't get recorded.

So that's a shame, but hey, we still have 54 minutes of great music here. These August 1970 concerts had significantly different set lists than the concerts done in October through December 1970, after the "Layla" album was recorded. Most of the songs for the "Layla" album weren't ready yet, so the set list relied heavily on Eric Clapton's 1970 solo album, just titled "Eric Clapton." But "Anyday" is from the "Layla" album, yet was almost never played in concert, so this is the only good sounding version of that song done by the band. "Tell the Truth," "Have You Ever Loved a Woman," and "Little Wing" would end up on the "Layla" album too. But "Tell the Truth" is done very differently, similar to a fast version made for a single that got withdrawn at the last minute.

As an aside, Jimi Hendrix died on September 18, 1970, while the "Layla" album was being recorded. It has been widely believed that Clapton covered Hendrix's song "Little Wing" in tribute to Hendrix and to mark his passing. So it's interesting to note that he was already doing it in this concert, a month before Hendrix's unexpected death. Before the song, Clapton commented it was "dedicated to a great friend called Jimi."

I started with the improved version that appeared in October 2021. But then I tried to make some additional improvements to it. Using the sound editing programs X-Minus and Spleeter, I boosted the vocals some. I also was able to clear a lot of muck and hiss out of the times between songs. I greatly increased the few spoken comments, allowing one to actually understand most of them. I also cut out about two minutes total of dead air between songs. Finally, once I was done, I handed all the files to musical friend MZ, who improved the equalization on all the songs.

One curious fact about this band is that it appears Dave Mason of Traffic fame was originally slated to be the fifth member. He took part in early rehearsals, took part in the recording of the withdrawn "Tell the Truth" single mentioned above, and was with the band for all of their first concert, in June 1970. (That was the only show the band would do before August.) But Mason put out his first solo album "Alone Together" in July 1970, and had a lot of success with it. Apparently he decided he couldn't promote himself as a solo artist and be part of Derek and the Dominos, so he quit the band.

I mention all this because it's been claimed that Mason played with the band one more time, namely, the late show of this very concert. If that's true, I don't find any evidence of it on the recording. But since this is only part of the late show, it's possible his participation didn't get recorded. If he only played a song, or a few, those probably would have been at the end of the show and thus missed here.

Note that I previously used four songs from an earlier version of this concert on the "Live and Rare" compilation, as I mentioned previously. I have removed those four songs to avoid duplication. But I've added three more, and improved the sound quality on two others. So if you've previously download that album, I suggest you delete that and get the latest version instead. You can find that here: 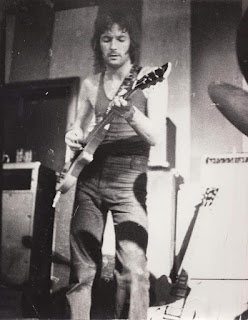 I did find one photo from this exact concert. But it's in black and white and not that great. Still, I'm posting it here for anyone who is curious.

For the album cover, I chose a photo taken during the band's first concert, at the Lyceum in London in June 14, 1970. This picture is a bit low res. But I actually found several from that show, and one of them had Clapton's head more close up. So I pasted that head in and resized it. I think that helps give the impression the whole thing is less blurry than it is, since his head is a visual focus.

As I mentioned above, that June concert was the one where Dave Mason was part of the band for the entire thing. Sure enough, he shows up in the photos. But I cropped him out of this one. He's just out of frame on the right side.