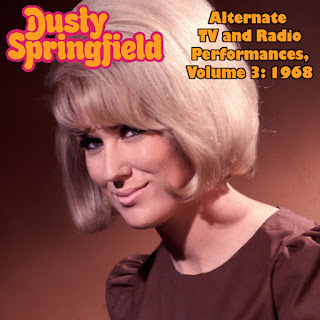 In the late 1960s and early 1970s, Dusty Springfield gave many performances on TV and radio, helped by the fact that she hosted her own British TV show for several years. I've divided them up into two series: one called "On TV and Radio" for all the songs she never put on record, and this series, "Alternate TV and Radio Appearances," for the songs she did put on record.

There had been three albums in this series. But I did a little more digging and found some more songs. Many of them were from this time period. So I took a bunch of songs that had been on Volume 2 and moved them here, added some newly found songs, and created this album. What had been Volume 3 is now called Volume 4.

As I mentioned above, Springfield had her own TV show for several years. In 1968, it was called "It Must Be Dusty." All but the first two and last three songs here are from that show. The rest are from appearances on other TV shows. Every single song on this album is officially unreleased.

The sound quality varies. I believe I found all of these songs from YouTube videos, and some of those sound better than others. But I have standards, and nothing here falls below what I'd call "good" (though there isn't much here that sounds "great").

This album is 43 minutes long.

I don't know where or when the cover art photo is from. But this is roughly what she looked like around 1968. I had previously used this as the cover for Volume 2 in this series. But I moved it to better fit the time frame.