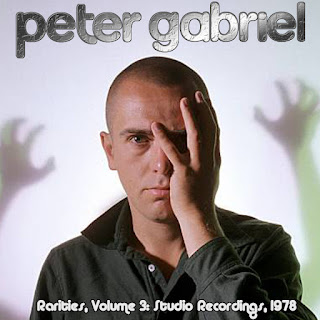 First off, I must apologize to Mike Solof for taking so long to post this. I feel like that guy in a "Kids in the Hall" skit who kept saying "It slipped my mind," but it kept slipping my mind. I'll try to do better in the future.

Anyway, hopefully by now you've seen enough albums in this series to understand what this is. Mike has collected all of Peter Gabriel's stray tracks from 1978. Turns out there's enough for an album, even though that was the same year he put out his second solo album (simply titled "Peter Gabriel").

Mike prefers to create a PDF file and then give his own explanation about the music in that, so I'll keep this short. Make sure to read his PDF for more.

I made the album cover, after getting Mike's okay on the photo to use. This one comes from 1978, when Gabriel didn't have much hair. The shadows of the hands on the wall are unchanged from the originals.