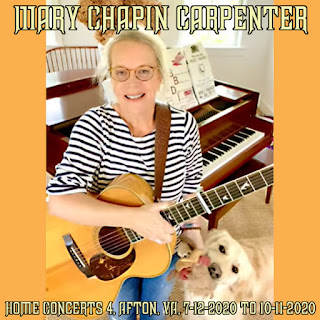 I'm trying to get back to posting more of the home concerts from 2020 that I'd missed. Here's another one from Mary Chapin Carpenter.

There's one frustrating problem with this album that almost caused me to give up on posting the rest of her home concerts. Ever since she started posting songs performed from home on YouTube in early 2020, she'd made a big deal out of her two pets, her cat White Kitty and her dog Angus. White Kitty seemingly slept close to 24 hours a day, so was almost never seen or heard from. But Angus was usually there in the video, hanging around the same room Carpenter was in.

This typically wasn't a problem, since the dog generally stayed quiet and didn't bark in the middle of songs. But around the time frame of this album, a squeaky toy showed up, and got used. I've tried with various sound editing programs, but there doesn't seem to be a way to get rid of the squeaky toy squeaking. I guess it's too close in range to the human voice, so removing one tends to remove the other.

I've tried to get around this in two ways. For three songs, there was so much squeaking that I decided they were unlistenable, and I haven't included them here. Those are "The Way I Feel," "We Traveled So Far," and "Where the Beauty Is." If you want to hear them, they're still on YouTube, squeaks and all. The other thing I did is that the squeaking tended to be worst during her talking before songs, since she typically engaged with Angus, petting it and so forth. Once the song started, the dog almost always settled down and stayed quiet, though there were exceptions such as those three songs mentioned above. So with the talking, I cut out more of the dialogue, if a lot of squeaking was going on at the same time.

So this is mostly squeak-free, but there's still some here and there. Hopefully, it won't annoy you too much. The good news is, this album coincides with a time in which the squeaky toy was popular. For whatever reason, it pretty much disappeared after this, so the last two volumes in this series are largely squeak-free.

Since my write-up is mainly about the squeaky toy problem, I thought it was fitting to include a screenshot that includes the dreaded toy. Carpenter is holding it while Angus is chewing on it. I had to use a rectangular shaped image to get both her head and the toy in view. So there's some blank space on the sides.