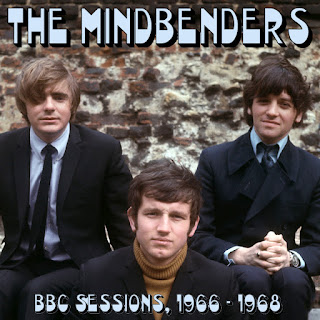 I'll be explaining more what I'm doing in a different post soon, but I'm going through a phase where I'm posting as many BBC sessions as I can, even if it's from musical artists I'm not a big fan of. BBC sessions need to be better known in general, especially when there's no official album for a given artist. And now that I'm using the audio editing programs Spleeter and X-Minus to wipe the BBC DJ talking from the music in a better way than ever before, I feel even more of a need to post these sessions.

I'm happy to say that I'm not the only person working on improving BBC sessions lately. My musical friend Lilpanda feels the same way I do, and has also learned how to use the X-Minus program. This particular album is almost entirely his effort. Most importantly, he wiped the DJ vocals. I merely added the info to the mp3 tags and balanced the volume levels from song to song.

Here's the Wikipedia entry on them:

Beyond that, I didn't know much, and I hadn't heard their music beyond a hit or two. However, I was intrigued when I found out that allmusic.com is very high on them. Here's what their write-up on the band says after discussing their "A Groovy Kind of Love" hit:

"Had the group only succeeded in locating a decent follow-up, they might well have developed into one of the finest British bands of the late '60s. Instead, a series of disastrous choices of 45s condemned them to the ranks of rank also-rans, and it is only later that the sheer quality of their other work -- material hitherto lost on two Mindbenders LPs -- had been re-evaluated sufficiently to let listeners state that here was one of the greatest of all Britain's post-beat bands."

What also intrigued me is the band's connection to the 1970s group 10cc. After Wayne Fontana left, the band's lead vocalist and main songwriter was Eric Stewart. He would later be one of the lead vocalists and songwriters in 10cc. And when one of the other three members of the band left in early 1968, the replacement was expert songwriter Graham Gouldman, who would be one of the other lead vocalists and songwriters in 10cc. Unfortunately, the record company wasn't very interested in Stewart's songwriting, so most of the songs they did were covers. And Gouldman joined too late to have much of an impact, although "Schoolgirl" and "Uncle Joe the Ice Cream Man" were written by him. (He probably plays on the last five songs here.)

If you enjoy British pop from the 1960s like the Hollies and the Move, you should enjoy this. I wish they would have done more originals and fewer covers of very well known songs, but you can't have everything.

Thirteen of the 22 songs here have "[Edit]" in their titles. Those are the ones where Lilpanda wiped the BBC DJ talking while keeping the underlying music.

All of the songs are officially unreleased. Many of the songs here were not released by the band in studio versions, such as "Ride Your Pony," "We Can Work It Out," "Rock Me Baby," "Omaha," and "My White Bicycle." to name just a few.

This album is 55 minutes long.

The photo used for the cover art is from 1967, before Graham Gouldman joined the group.