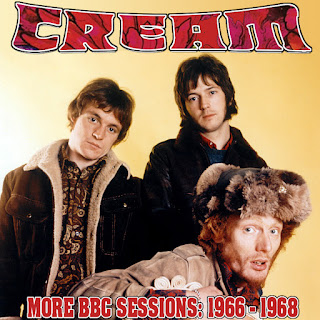 First off, I have completely overhauled the two Cream BBC sessions albums I've posted already. It turns out the band's officially released BBC album is derided by serious fans. It seemed the powers that be just used bootlegs as sources instead of finding the best sounding versions, then they clumsily applied noise reduction and other damaging techniques to make the sound worse.

So for my overhauled versions, I'd drawn from the excellent work of Prof Stoned. He runs a blog where he's improved the sound of many albums, mostly from the 1960s. You can find it here:

I used his versions whenever possible. What he came up with, in collaboration with other serious Cream fans, is significantly better than the official album. So if you're interested in downloading this, I strongly suggest you download the revised versions of the two Cream BBC albums I posted here already. They have new cover art, and even new names ("BBC Sessions" instead of "At the BBC," to be consistent with the other BBC albums I've posted from other bands.

Here are the links:

So what's this album about, then? As I've said many times before, I generally dislike having two versions of the same song on one album. So those other two albums included the best sounding versions of every song Cream played for the BBC. In a few cases, I did use two versions, if I could chronologically fit one on Volume 1 and the other on Volume 2. This is everything that's left over.

That said, I think the music is worthy in its own right. Cream was known for the musical interplay of the three members, with a particular focus on the lead guitar heroics of Eric Clapton. They never did a song the same way twice. So you'll find a lot of excellent performances here. And in terms of sound quality, about half are as good as the versions of Volumes 1 and 2. The others generally sound at least good, although "I Feel Free" and "Tales of Brave Ulysses" are a bit rough.

There's really only one song that sounds out and out poor. That's "N.S.U.," which I demoted to bonus track status.

I also included three songs that weren't actually done for the BBC. "Dance the Night Away" and "World of Pain" come from a 1967 concert bootleg. I've included them because the band almost never played those songs in concert. In fact, this recording may be the only such time for both. The concert took place during the recording of the album they were on, so they were briefly remembered enough to give them a try. The sound for those two is merely okay, but still well above the bonus track.

The third song I included is a version of "Sunshine of My Love" recorded for the Glen Campbell Show. It's the only officially released song here, as this version was released on the "Those Were the Days" box set.

I'm not sure when or where the cover art photo is from, but I liked it, so I used it. Ginger Baker, at the bottom, was a little lower in the original, but I used Photoshop to raise him up a bit, so I could fit all three faces in the frame without having the text over them.