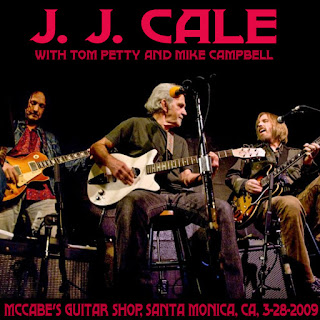 Lately, I've been tinkering around with the sound editing programs X-Minus and Spleeter. A few days ago, commenter Mystic suggested this concert bootleg as one that would benefit from some sound editing. It generally sounds excellent, but J. J. Cale's vocals were too low. I'd never heard this one before, but after giving it a listen I decided Mystic had a good idea. So here's the fixed version.

First off, I want to address the presence of Tom Petty and Mike Campbell. (In case you don't know, Campbell is the lead guitarist in Petty's band the Heartbreakers.) Petty is known to have been a big fan of J. J. Cale, and covered some of his songs, like "Thirteen Days," "Crazy Mama," "Call Me the Breeze," and "Travelin' Light." Petty and Campbell showed up about halfway through the show, before "Crazy Mama" was played, and stayed on stage until the end.

However, in terms of Petty, don't get too excited. He co-sang the lead vocals with Cale on "I'd Like to Love You Baby," which is nice. But other than that, you'd be hard pressed for any evidence that he was there, other than Cale talking about him between songs. He was content to play a sideman role of just strumming rhythm guitar, and literally never said a word for the entire show. But Mike Campbell made more of an impact. Although he also never talked, if you listen closely, some of the guitar solos are his.

That said, this concert is still mainly about Cale. What I like about it is just how good it sounds. It's an audience recording, but it's very hard to tell that it isn't a soundboard instead. I'm sure this was helped greatly by the fact that it's a small venue, and a maximum of 150 people were there.

The one problem, as Mystic pointed out, was that Cale's vocals were low. Note that Cale has tended to downplay his vocals and keep them low in the mix of whatever he's recording for his entire career. But this concert he was even lower than that. Part of it may have been something about the P.A. system or the way it was recorded. But part of it also seems to have been that Cale had a sore throat that evening and it limited his singing, a fact he mentioned several times during the concert.

I mainly used the X-Minus sound editing program to bring up his vocals. Weirdly, on some songs I didn't have to change much, but on others I had to raise his voice drastically. I generally went through everything he sang line by line, and occasionally even word by word, to bring things up to a good level. He tended to trail off towards the ends of his lines, so I put in some effort to combat that.

I must admit I'm not a fan of how he usually buried his vocals low in the mix. So, while I was at it, I boosted his vocals here to what you'd typically expect for lead singers. You can actually make out what he's saying nearly all the time. And I also did a lot of work to boost his voice for his talking between songs, where he had a tendency to mumble.

I made one other significant change. One key reason it's obvious this is an audience recording instead of a soundboard is that the audience could be quite loud at times. There often were people shouting "Woo-hoo!" or the like during songs, and those shouts could be louder than the lead vocals or the music. I systematically went through the recording and remove all of those shouts. I also cut down or removed clapping or cheering when it happened in the middle of songs. The end result is just like how a soundboard is supposed to be, where you hear what's happening on stage, and only hear the audience when it cheers at the ends of songs.

Finally, I handed the concert to musical friend MZ, who did his usual work of making sure the equalization was just right. He boosted the tremble to give it some more brightness.

This concert is an hour and 31 minutes long.

We're lucky that there are a few photos of Cale, Petty, and Campbell from this concert. I picked the one I thought was best. There were other band members of stage, but this photo didn't include them.