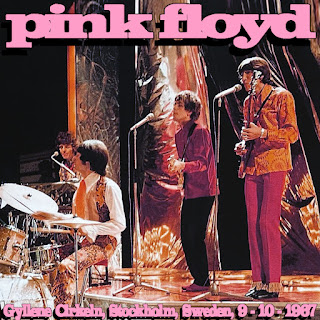 Here's something I'm very psyched to post. If you're a fan of early Pink Floyd music, you really need to give this a listen.

Syd Barrett was Pink Floyd's lead singer and main songwriter from the time the band formed around 1965 until he flamed out around the end of 1967. The band had a lot of critical and commercial success in 1967, but unfortunately there's no good concert recording of them from when Barrett led them, either officially released or on bootleg. "The Early Years" box set did include a complete show of about 50 minutes recorded at the Gyllene Cirkeln (Swedish for "Golden Circle") in Stockholm, Sweden. It's clearly the best Syd Barrett-era live recording in terms of the music. But there's virtually no vocals to be heard whatsoever! It basically sounds like an all-instrumental concert.

In recent months, I've been doing a lot of audio tinkering with the programs Spleeter and X-Minus. It occurred to me I could strip the vocals from some versions of songs and add them to the Stockholm versions that were lacking vocals. Someone at a Pink Floyd forum named SydMorrison67 had already done this to one song from the concert, "See Emily Play." He did such a great job that I simply used his version. But I added the vocals for the others that needed vocals. I took the vocals from either the studio versions or the BBC versions, whichever I felt fit better.

Personally, I think the end result sounds really great! It's like finding a soundboard recording of the Barrett-era band after all these years.

Some other changes were made too. There isn't much banter between songs, but what little there was was so quiet that it could barely be heard. I boosted the volume of that talking drastically, so you can clearly hear what's being said. Furthermore, after I finished editing the files, I handed them to my musical friend MZ. He did some things to improve the listening quality, such as filling out some under represented frequencies.

Now, as to why the recording on "The Early Years" lacked vocals in the first place, that's a bit of a mystery. Some speculate that the P.A. system at the show was badly mixed. But there are audience bootlegs of concerts from Rotterdam and Copenhagen from roughly the same time period (September and November 1967), and the vocals on those can barely be heard as well. Three shows is a pattern, not a fluke. Perhaps there was something systematically off with the band's sound set-up during those months. But another possibility is that lead vocalist Syd Barrett was singing very quietly and/or not near the microphone. By September 1967, his behavior had already gotten erratic, to the point that the band had to cancel a U.S. tour. Or it could be a combination of the two. Note that the backing vocals couldn't be heard well either.

I found this explanation on a music blog (radiodupree.blogspot.com):

"Anders Lind [the person who recorded the show] explained that there was no such thing as a PA system back in '67, and there was no one mixing the sound. The sound came from the amps on stage and the signal from the vocal microphones were sent to a couple of small vocal amps. The sound was a result of each musician handling their own amp, and during the show the vocal amps would probably not be adjusted at all. But the lack of vocals on the tape can also be a result of Syd's health and/or attitude at the time. Maybe he did not make the effort to sing out loud, by some reason."

One additional factor is that it turns out the Gyllene Cirkeln was actually a supper club! Which means that it was a restaurant with a stage, and you ate dinner during the show. That typically meant the audience was more the type of crowd who wanted to see Sammy Davis, Jr. or Englebert Humperdinck, not a psychedelic band! Furthermore, although Pink Floyd had just had a top ten hit in Sweden with "See Emily Play" the previous month (as well as it being a hit all over the world), they had the indignity of being the opening act that night for a mildly popular Swedish band called the Sleepstones. It sounds like Pink Floyd had a Spinal Tap moment that night. 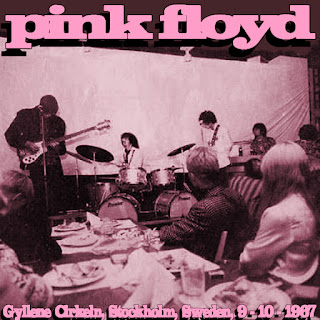 I first made the cover art shown above. That uses a photo of the band lip-syncing their way through the British TV show "Top of the Pops" in mid-1967. But after I made that, I did some more research on the details of this concert and managed to find a black and white photo from the exact concert in question! So I've created an alternate cover for people who prefer accuracy over appearance, since the picture isn't as good.

As you can see from this actual, realm and strange photo, the venue was very small. Perhaps this helps explain the problem with the vocals on the recording. They might have been able to be heard to some degree without any amplification, so perhaps what the amps did didn't matter so much.

Let me explain in more detail what I did with the vocals. For "Matilda Mother" and "Scream Thy Last Scream," it was as I described above, taking the vocals from one version and adding them to another. Everything seemed to be in pitch for all the songs, so that wasn't a problem. But I had to make lots of minor adjustments to make sure the timing matched up. "Pow R. Tok H." is basically an instrumental, but there are some vocal noises near the start. Some of these actually could be heard on the original recording, especially before the band loudly joins in. So I kept those but added in more to make sure it all could be heard. "Set the Controls for the Heart of the Sun" is the one case where some of the original vocals could be heard over the full band. But that was only intermittent through the song, like a radio station fading in and out. I kept those vocals, and added in more. The fact there was some vocals helped me align the additions.

"Arnold Layne" actually comes from another concert. As I mentioned above, there are bootlegs from Rotterdam and Copenhagen from the same late 1967 time period. Both of those shows have the same problem of the vocals not being heard, as well as poorer sound overall. They also have pretty much the same set lists. But "Arnold Layne" was played at the Copenhagen concert, and the instrumental sound was pretty decent. So I used the same trick and added vocals to that one too. Consider it kind of a bonus track at the end.

I explained what I did with the cover art up above as part of my explanation about the venue and such. The only thing I'd add is that I usually hate black and white album covers, so I tinted the alternate version to make it a little more interesting.