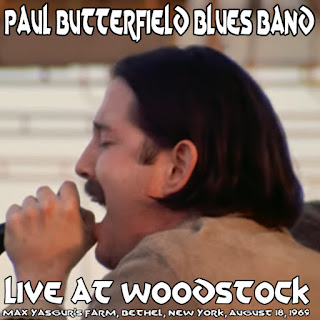 A few days ago, an unnamed commenter pointed out that I'd posted a few Woodstock sets a while back, and suggested that I should post some more. I thought that was a good idea, so here's another one. The entire legendary 1969 Woodstock Festival concert was officially released in 2019. But there are a couple of problems with that. For one, it'll cost you a pretty penny, because the box set contains 38 discs! And for another, it was only on sale as a limited edition, with less than 2,000 copies available.

Most of the biggest names from the festival have put out their sets on more affordable single albums, such as Creedence Clearwater Revival, Jefferson Airplane, Santana, and so on. But a few have not, and most of the lesser known acts have not. Here's one that I think has been overlooked.

The Paul Butterfield Blues Band was one of the best blues rock bands of the 1960s, lead by harmonica player and lead singer Paul Butterfield. However, they had a lot of personnel turnover. By the time of the Woodstock Festival in 1969, Butterfield was the only original member left. That said, the replacements were quite talented, including Buzz Feiten on lead guitar and David Sanborn on saxophone, and the band put on an excellent concert.

Unfortunately, Woodstock didn't give the band a big career boost like it did for some other acts. One big factor was that they were filmed, but they weren't included in the Woodstock movie. The band's fortunes continued to decline, and they broke up in 1971. Butterfield died young, overdosing in 1987.

This album is an hour and eight minutes long, and contains the full set.

I couldn't find any good photos of the band's Woodstock performance, a sign of how it has sadly been overlooked. But the video of the entire set is available on YouTube, so I took a screenshot of that. I couldn't find a good one of the whole band (there were a lot of them, spread out on stage), so I opted for a close up of Butterfield.