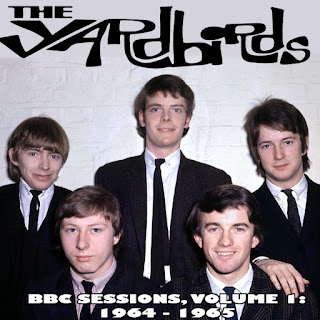 Boy, am I glad to post this album. The Yardbirds are a no-brainer fit for the kind of music I post at this blog, but up until now I hadn't posted any of their music. For some artists, that's just because I hadn't gotten around to them yet. But for the Yardbirds, I wanted to, but I was daunted by the sheer mess of their musical discography.

In my opinion, the Yardbirds' musical legacy has been treated shabbily from day one up until current day as I write this (in November 2021). Some artists have been treated great, with lovingly created deluxe editions, box sets, and the like. While others have been treated terribly, or ignored, like the Easybeats. The Yardbirds are a more confounding case, because many archival releases and editions have come out, but few of them have hit the nail of the head. One gets some things right, another gets other things right, etc... So that leaves it to someone like me to have to sort through all that stuff.

Luckily, when it comes to the Yardbirds' BBC recordings, someone else has paved the way for me. A music collector named DocDandy created a list of what he considered the best sounding version of each BBC performance the band did. So I almost always followed his advice.

But there is another problem. As a rule, I don't like having multiple versions of the same song on the same album, yet the Yardbirds tended to play their small number of hits on TV and radio over and over again. So I listened to each version, and chose the one that I thought had the best sound quality. However, a big part of the Yardbirds' appeal, maybe the biggest part, are the guitar solos from their three stellar lead guitarists, Eric Clapton, Jeff Beck, and Jimmy Page. That means even versions with lesser sound quality are desired by many fans. So I'll be posting this album, plus two more, with almost no repeated songs. Then I plan on posting a fourth album that has all the other unique BBC performances, usually with poorer sound quality.

Speaking of those famous lead guitarists, although many fans know Eric Clapton was a member of the Yardbirds, he actually wasn't with the band for that long. As soon as they started to get famous with their first big hit, "For Your Love," in early 1965, he jumped ship, feeling the band was too poppy and not bluesy enough. As luck would have it, he's only on the first two songs here, which also happen to be the only ones from 1964. All the rest feature Jeff Beck on lead guitar.

There have been a few official Yardbirds BBC albums over the years. But I'll argue that, once this three-album series is done, you'll find these albums sound better than any of those, thanks to that list made by DocDandy. All but one of the songs in the three albums have been officially released, including all the songs here. But these are the best sounding from those various albums.

Furthermore, sometimes BBC DJs talked over the song's intros. I've used the X-Minus sound editing program to remove such talking while keeping the underlying music. Luckily, that only happened once on this album, on the last song. But it's more common on the other two (as well as the extra fourth album of duplicated songs).

Only the first two songs here were done before a cheering audience, the same two 1964 songs with Clapton. But luckily those were recorded with excellent sound quality, especially for the 1964 Yardbirds. Frankly, those songs (taken from a TV show) sound better than the songs from their early live albums.

By the way, the sound quality of the song "I've Been Trying" isn't as good as the others. But I figured it was worth including, and not as a bonus track, because this is the only known recording of the song by the band. It was originally done by the Impressions.

This album is 38 minutes long.

The cover photo is from 1964, and includes Eric Clapton. It would have been more accurate for me to use a photo with Jeff Beck in the band, since he's on most of the songs here, but I figured this was my only opportunity to use the Clapton photo, so I took it. In case you're curious, he's on the right, in the back row.