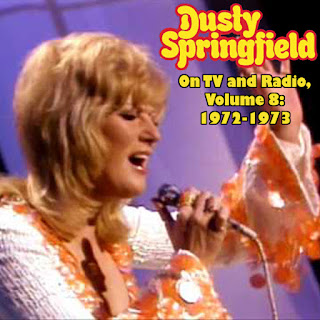 Here is the eighth and last of the Dusty Springfield albums that contains songs she only did on TV or the radio and never recorded in the studio. It's practically an entire alternate career for her in the 1960s and early 1970s.

Most of the previous albums in this series each covered one year. But this time, one album covers two years. That's because her popularity started to wane in the early 1970s, and she had fewer appearances on TV and radio. That would culminate in her recording an album in 1974 that her record company wouldn't release, and then her essentially going into retirement for a few years. So this marks the end of an era for her.

However, even though the number of her appearances was tapering off, what she did was still high quality. Luckily, this era ends before disco and other popular trends marred her music in the late 1970s.

Every song but one here is officially unreleased. That one is "Stepping Out with My Baby," which comes from the "Goin' Back" box set. The other songs are generally from Springfield's appearances on the TV shows of other stars, such as Tom Jones, Lulu, and Bobby Darin.

I created this album on November 22, 2021. Volume 7 grew so long that I split it in two. So I highly recommend you redownload that one too, if you have it already. I also made changes to a bunch of other Dusty Springfield albums at the same time, which I describe in a different post.

I had previously used this album cover on Volume 7 in this series. But went I split that album in two, this cover went with Volume 8, because the photo dates from 1972. I changed the text to fit the new volume.