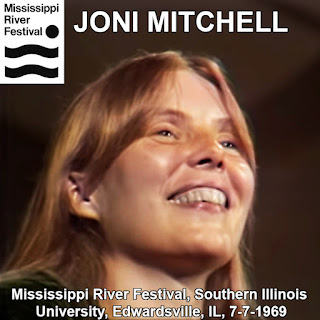 Just minutes ago, I posted the Arlo Guthrie set from the 1969 Mississippi River Festival. If you want to know more, you should read what I wrote there. In short, Guthrie and Mitchell were co-headliners on one night of the festival, and their complete sets happened to be recorded for a public TV show. As a result, professional quality soundboards exist of both sets. So here's the Mitchell one.

In recent years, Mitchell has finally gotten interested in compiling previously unreleased archival material from her long music career. As I write this in early November 2021, she already put out "Archives, Volume 1," and "Volume 2" is due to be released in two weeks. That one deals with the years 1968 to 1971. I had been reluctant to post anything here from that time period, for fear that it would end up there. But I've checked out what's going on "Volume 2," and none of this show is included, despite its excellent sound quality. So here it is for you.

As with the Guthrie set, Mitchell's set was introduced and sent off by famous TV personality Steve Allen. I've left his comments in for the same of completeness, even though I could easily do without them. Guthrie played with a small band, but Mitchell was all on her own, playing some songs on guitar and others on piano.

Also like the Gutrhie set, I though the sound quality was generally excellent, except for some hiss. I didn't have a problem with the hiss during the actual songs, since the music drowned it out. But I used some noise reduction and other tricks to reduce the hiss for the banter between songs.

This concert is 55 minutes long, including the Steve Allen remarks.

As I was saying for the Guthrie set, there's a 20-minute-long video on YouTube that has some songs by both Guthrie and Mitchell from this exact concert. So I used that to get a screenshot of Mitchell. And as I did with the Guthrie cover, I added the 1969 festival logo to the upper left corner.