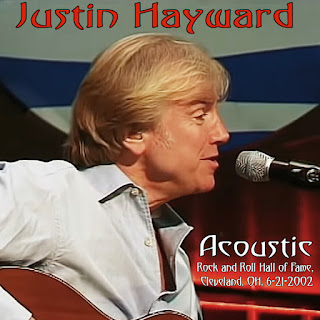 Graeme Edge of the Moody Blues died five days ago as I write this, on November 13, 2021. He was 80 years old. To mark his passing, I thought I'd post something by the Moody Blues. It turns out I didn't have anything ready to post by the band, per se. But I do have an interesting acoustic concert by the band's main singer and songwriter, Justin Hayward. So here it is.

The Moody Blues weren't inducted in the Rock and Roll Hall of Fame until 2018. But for some reason, in 2002, Justin Hayward gave an unusual acoustic concert at the Hall of Fame in Cleveland. I say unusual because it was part concert and part interview. An emcee questioned him on stage, and he spent most of the time talking. You can watch the whole thing on YouTube; it's about an hour and a half long in total. But from time to time, he would play a song relevant to what was being discussed.

Personally, I think the whole thing is interesting to listen to once, but it doesn't have much replay value since it mostly consists of talking. So what I did was select just the songs, plus some banter leading up to the songs. In this way, it would be just like a concert, at least the kind in which the performer usually talks a bit before each song. I made clear to edit out any stray comments by the emcee, so it sounds like it's just Hayward on stage.

One really nice thing is that the sound quality is excellent. This was professionally recorded for the video, I think, so it sounds as good as an officially released live album. The only snag is that it's rather short. It's 36 minutes in all, with about six of those minutes being talking. In some cases, he only plays parts of songs rather than the whole thing. But still, it's a really nice way to hear Moody Blues songs, vastly different than the highly produced studio album versions. Oh, and he does a nice cover version of a Buddy Holly song, "Heartbeat."

The cover art comes from a screenshot I took of the YouTube video of this concert.