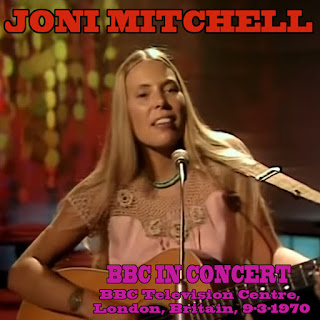 Yesterday (November 13, 2021) was a very good day if you're a Joni Mitchell fan, because the archival box set "Archives, Volume 2" was released. It deals with the years 1968 to 1971, and is entirely previously unreleased material.

What I'm posting here is a bootleg from that time period, but sadly, only one of the songs performed here was included in the box set, "All I Want." That's because this concert took place shortly after she wrote that song, and the lyrics weren't finished yet, so they're significantly different to the final version. But the whole concert should have been released, not just that one song, so I'm posting it here.

What sets this concert apart from others of hers around that time period is the sound quality. This was recorded by the BBC for a TV show called "In Concert." As a result, it's professionally recorded, and sounds excellent. In fact, she did another show for the BBC less than two months later, and that one was included on the box set, probably because James Taylor had a prominent guest role in it. But I've compared the sound on this bootleg compared to that concert on the box set, and I think this actually sounds better.

There was only one snag with the sound quality. For a couple of the songs, especially "Hunter" and "The Gallery," there were quite a few inexplicable clicking noises through the songs. Luckily, I've recently gotten into using the sound editing program Spleeter, and I was able to reduce or lessen more of those clicks. But some were so baked in that I couldn't completely remove them. Also, there's a stray click here and there on a couple of the other songs near those.

But those are just some minor hiccups. Overall, this is a must have for any Joni Mitchell fan. In addition to playing many of her most popular songs up until that point, she played three songs from her "Blue" album, which would be released in 1971, plus "Hunter" which was a "Blue" outtake that didn't get released at all until decades later.

This concert is 48 minutes long. According to jonimitchell.com, one more song was played, "Willy," but it wasn't broadcast so it wasn't bootlegged.

The video footage from this TV broadcast can be found on YouTube. I made the cover art out of a screenshot from one of those. I also used the same font and color for the text as the titles that appeared at the start of the TV show.