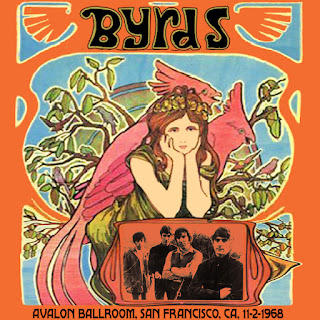 I just posted a live Byrds concert from 1968 yesterday. But what the heck, I have another one with everything ready for posting, so here it is too.

When it comes to 1968 Byrds concerts, this one and the one I just posted (The Piper Club in May 1968) tower above everything else in terms of sound quality. In fact, this one sounds the best of all, good enough to be an official release. The performance is excellent too, making me wonder why this remains merely a bootleg.

A disappointment for many Byrds fans would be the band line-up. In August 1968, the band released their classic "Sweetheart of the Rodeo" country rock album. But just a few months later, two key members of that version of the band had already left: Chris Hillman and Gram Parsons. The line-up now consisted of Roger McGuinn, Gene Parson, Clarence White, and John York. This might have been York's first concert with the band. At the very least, it was from his first week or so.

While I would have rather had a concert like this with Hillman and Parsons still in the band, this line-up had its merits as well. White in particular was an excellent addition, with his stellar guitar playing skills.

This concert consists of an early set and late set. If you listen to be banter between songs, you can hear that "This Wheel's on Fire" is the last song from the early set, and "Pretty Boy Floyd" is the first song from the late set. On the popular bootleg I took this from, there's a song in between, "Stanley's Song." I've removed this song entirely for two reasons. One, it's from the soundcheck before the show (or something else), not from the show itself. But more importantly, it gets abruptly cut off halfway through. I also removed the one song repeated in the second set, "So You Want to Be a Rock 'n' Roll Star." I would have kept it if it was a good version with a nice guitar solo or something like that, but the version from the early set was clearly performed better.

The first set is about 10 minutes longer. It could be there were more songs not included. But I suspect the band simply played a shorter late set, because at the end of the early set there already was an issue with time running out. Apparently, the management told the band that the venue had to close by 2 A.M. So this was probably as much as could be squeezed in before then.

The songs played come from all phases of the band's career up until that point. But there's a fair number of songs played from the band's next album, "Dr. Byrds and Mr. Hyde," which wouldn't be released until early in 1969. Those songs are: "Old Blue," "My Back Pages - Baby, What Do You Want Me to Do," "Drug Store Truck Drivin' Man," "This Wheel's on Fire," King Apathy III," "Bad Night at the Whiskey," and "Nashville West." That album isn't considered a particularly strong one by the band's standards. However, I think the versions played her are generally better than those on the album.

Oh, a nice rare treat is the band's version of the classic Carl Perkins song "Blue Suede Shoes." According to setlist.fm, the band only ever played it one time. Admittedly, that database is probably very incomplete for this time period, so I'll bet they played it more. But it seems likely it was only done in late 1968, and it doesn't appear on any record.

This concert is an hour and four minutes long.

One again, I'm hindered by a lack of good color photos of a band from a certain time. Since I couldn't find a suitable photo of the band in concert, I searched for concert posters. I came across a nice one from the general era.

I had to make a number of changes to it though. The biggest one was that not only was the poster rectangular, it was longer vertically than most. So I cropped a lot out, and also vertically squished the bottom portion. Also, the orange box contained photos of the band members, but it was the wrong line-up. So I replaced that with a photo of the correct one, and then colored it orange to give it the same general look at the area it had replaced.