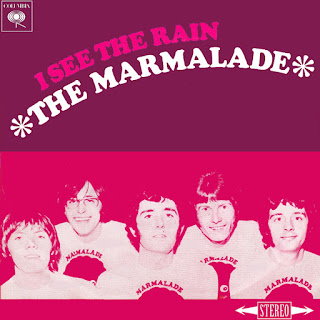 I must be a weird dude, because I'm often more interested in music from the 1960s than that of today. And I'm not just talking about the likes of the Beatles and the Rolling Stones. In my opinion, the quality of music in the late 1960s in particular was so high that often even the "bad" music was pretty darn good.

Marmalade is a case in point. They had a lot of hits in the late '60's and early '70s, but they were largely dismissed as a lightweight pop band, similar to the Herman's Hermits or the Hollies. In the decades since, it seems they've been dismissed even more, with their songs rarely played on the radio.

I think they're getting a bad rap. I find the situation somewhat similar to the Yardbirds. The Yardbirds were a talented band with musical chops and songwriting talent. But for their last couple of years, they were unfortunately paired with producer Mickie Most, who completely misunderstood the band and saddled them with songs like "Ha Ha Said the Clown" and "Goodnight Sweet Josephine" in an attempt to get more hits that didn't fit with who they were musically at all.

In the same way, the Marmalade's record company seemingly was only interested in hits, and wouldn't even let them put out an album for their first two years (1966 and 1967). But one of the songs foisted on them, a cover of "Ob-La-Di, Ob-La-Da" by the Beatles, was a huge hit, going to number one in Britain almost entirely due to the fact that the song was a can't-miss hit, but the Beatles didn't release it as a single. This stereotyped them as a poppy singles band who mainly relied on covers.

But in fact, they actually were very talented in writing their own music. My favorite song of theirs is the title song for this stray tracks album, "I See the Rain." At the end of 1967, a year filled with many all-time classics, Jimi Hendrix called that song "the best cut of 1967." But it must have been badly promoted, because while it was a number one hit in the Netherlands, it didn't make the charts at all in the US or Britain. It has slowly gained status over the years, appearing in movies and commercials, but it still isn't as well known as it should be, in my opinion.

This album gathers up pretty much all the band's A- and B-sides from 1966 and 1967.  There aren't that many of those, but I've also added three songs at the start from 1965 and 1966, when the band was known as "Dean Ford and the Gaylords." That was the exact same line-up. It's just that in mid-1966 the band's management decided their name wasn't the best and demanded a change.

I've also added a couple of cover songs the band performed for the BBC, "(I Know) I'm Losing You" and "Sixty Minutes of Your Love." Unfortunately, no good concert recordings of the band are publicly available, as bootleg or official release. But we do have a fair number of BBC recordings. I've taken the songs the band never otherwise recorded and included them on stray tracks compilations like this one. Then I've taken the rest and will post those as a separate BBC sessions album.

Admittedly, the Marmalade were never a top-tier band. But I'd argue that if you compare this album with other second-tier British bands from that time period, it holds up very well. And the vast majority of the songs here were still originals. One could imagine an alternate universe where the band signed with a different record company that appreciated their original music and properly promoted it, instead of trying to turn them into a poppy hits band. They probably would have a much higher reputation today, and written and recorded a lot more quality music.

By the way, I gather this is one of those bands where sometimes there's a "the" in front of their name, and sometimes there wasn't. According to Wikipedia, technically, they were known as "The Marmalade" until 1972. Since then, everything that gets released just uses "Marmalade." That's also what Wikipedia calls them, so that's what I'm calling them too.

This album is 35 minutes long.

For the album cover, I used the cover of the "I See the Rain" single. But I made some changes that I think improved the look. I lightened some colors and darkened others to provide more contrast. I also added stereo and record company logos that appeared on other releases by the band around that time.

Email ThisBlogThis!Share to TwitterShare to FacebookShare to Pinterest
Labels: 1965, 1966, 1967, Marmalade